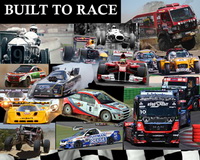 The Build is open to all current members of KiwiModeller.
Open to ANY Scale of Model using any medium and any method of construction from OOB to complete Scratchbuilt.
ONLY Vehicles of four or more wheels, (excluding motorcycles and motorcycle-like vehicles (i.e. Quads and trike types)).
Depict ONLY motorised vehicles specifically designed and/or built to compete in any class of sanctioned motor racing events from any era, including Land Speed Record attempts. This may include Post Showroom modifications.
If possible, include written and/or photographic documentation of the vehicle/s you are depicting. Yes, we are looking to depict ACTUAL vehicles that have or do exist.
Artistic Bases/Dioramas are acceptable.
The model/s must be built in entirety within the specified build dates and the build should be accompanied by a thread in the specific “Built to Race” group build forum documenting regular progress. Post shots of your sprues, and documentation if you have any, at the beginning of your thread. By the end of the GB (and no later than 24 hours after the completion date) participants should post a minimum of five pictures of the completed build in the GB’s completed builds thread.
There is no entry fee for the GB, but a donation for the upkeep of Kiwimodeller is always welcome.

Moderators for this GB are 1/35th Battalion (D1 – David) and one other person yet to offer their services.
Powered by Kunena Forum