Tweet Follow @twitterapi
Less More
7 years 5 months ago - 7 years 5 months ago #31 by Wally
Replied by Wally on topic Vintage Monogram 1/48 Mosquito FB VI
Thanks for all your comments guys.
This kit was originally part of the commissions stash but the client substituted two Tamiya Mosquitos and donated it to me. I may not have entered the D-Day GB but suddenly had this Classic Mozzie on hand and did a bit of research. Now it looks like I might be the first to finish ...? (Should be a prize for that)
Ian, I hadn't heard about Monogram's research malfunction specifically but it would explain why the fin flash decals didn't go as far up the fin as indicated in reference photos or Tamiya's instructions (which I was often referring to). I noted earlier the fin was too high thinking it was just a proportion issue.
The fin flash decals needed trimming on an angle at their base as well to match the fin connection and I think this might be the case with all Mozzie kits ....?
And Gaz, yes, I have noticed Tamiya provide decals for some of the interior canopy framing. This issue is something I'll have to get to grips with soon for my two Tamiya commission builds. I guess I could have just left that rear framing Interior Green which I painted on the outside first anyhow? I have noticed that Montex Masks sometimes provide Inside & Outside masks - as in Classic Airframes Lockheed Hudson - so maybe they are the way to go? 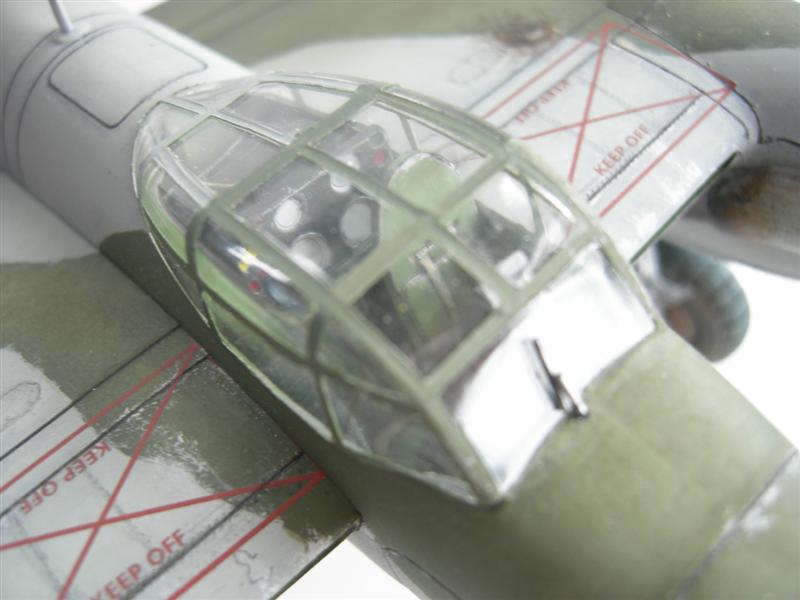 Anyhow, she's all finished now after a short session of final bits and pieces, including scratching a windscreen wiper. (It's not great super close-up)
You gotta remember this kitset is 50 years old this year! Yet it has amongst the best wingtip lights I have ever encountered. A molded bulb, plenty of space inside the separate glass to paint the colour and a good fit - 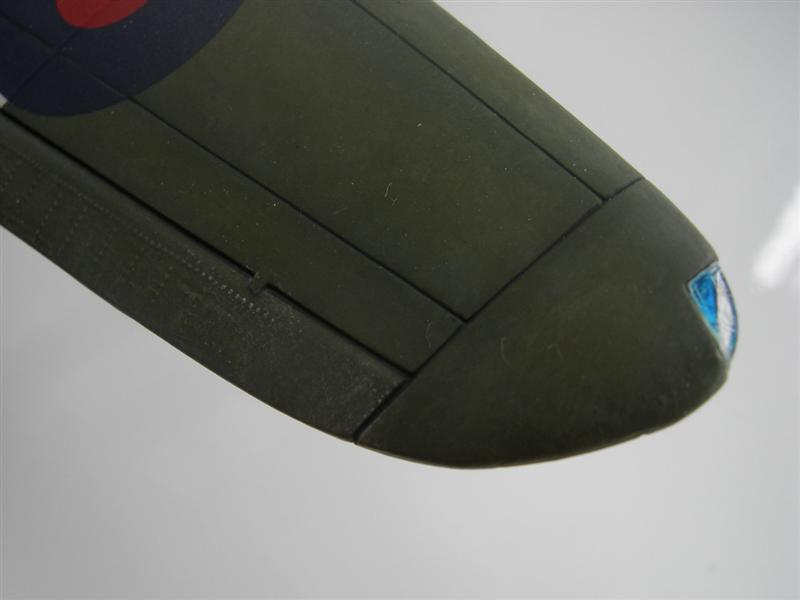 I attached aerial wire, fitted the props - which fit really well - and the kitset's underwing bombs dolled up a little. (The bomb and hanger is one part plus the tail ring) 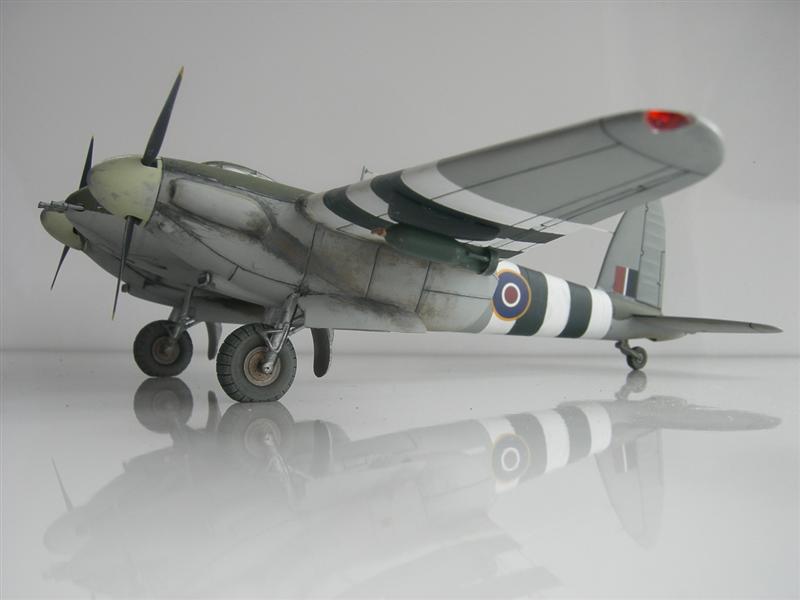 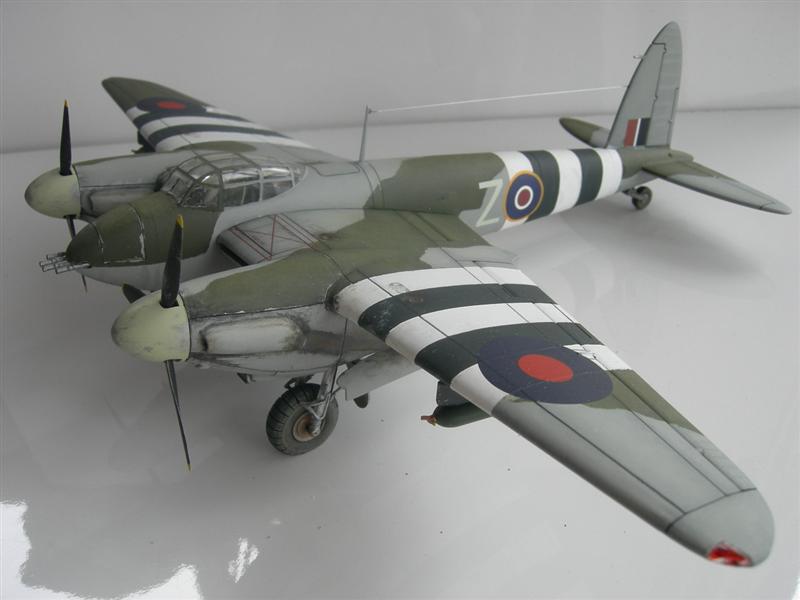 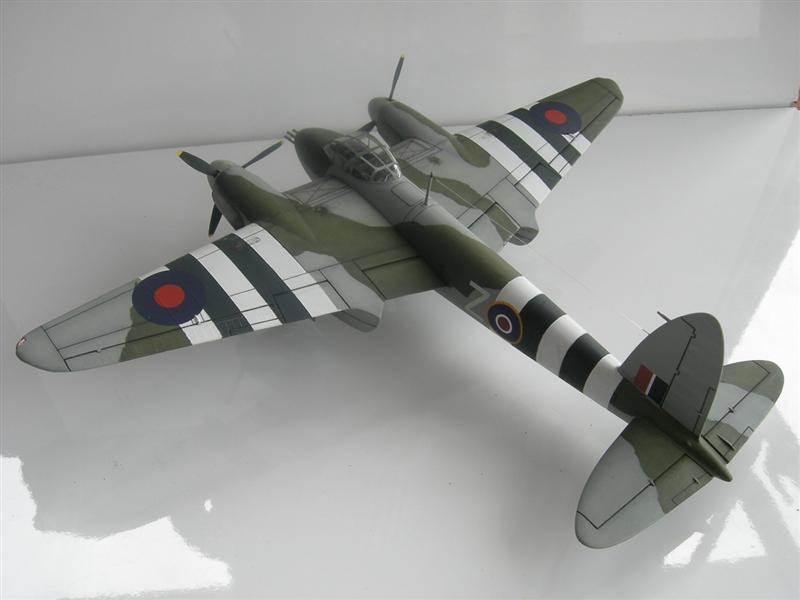 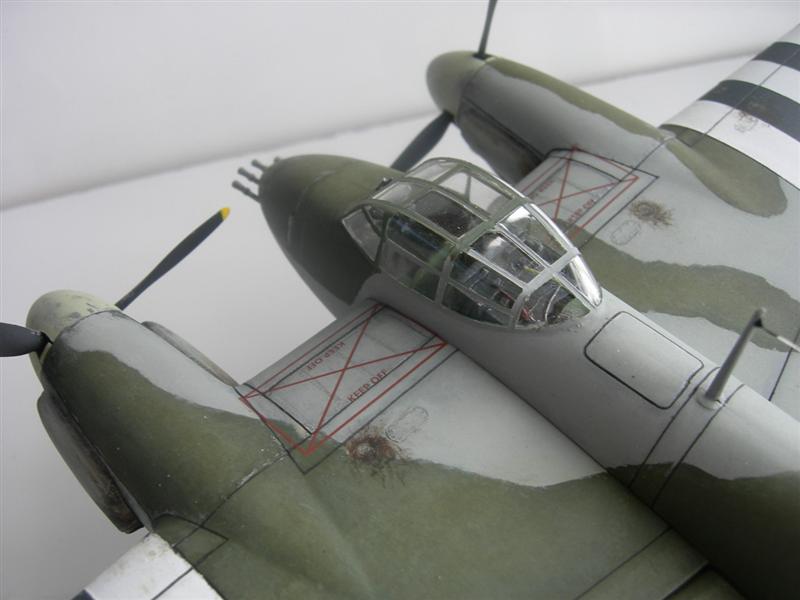 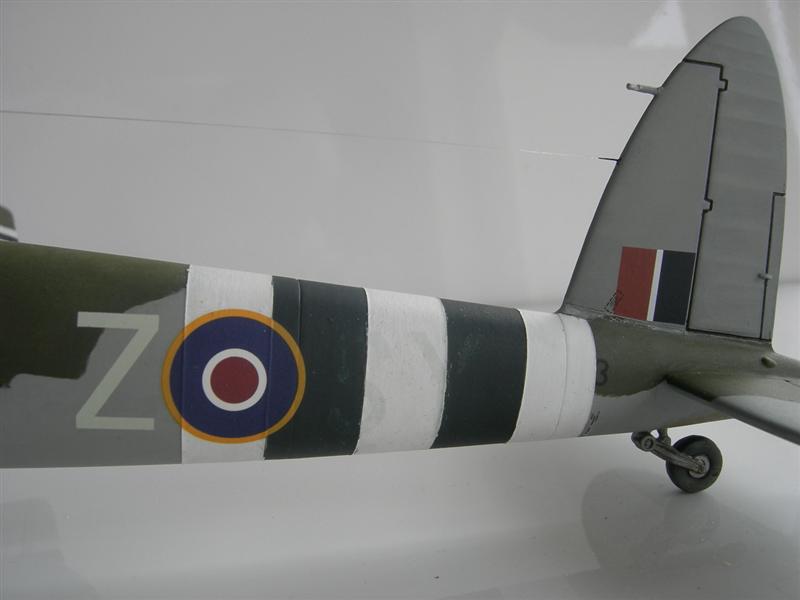 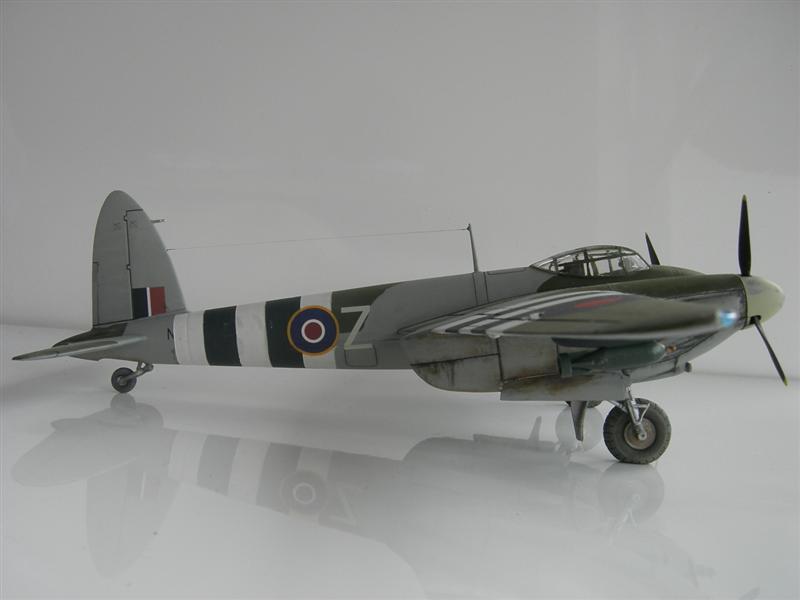 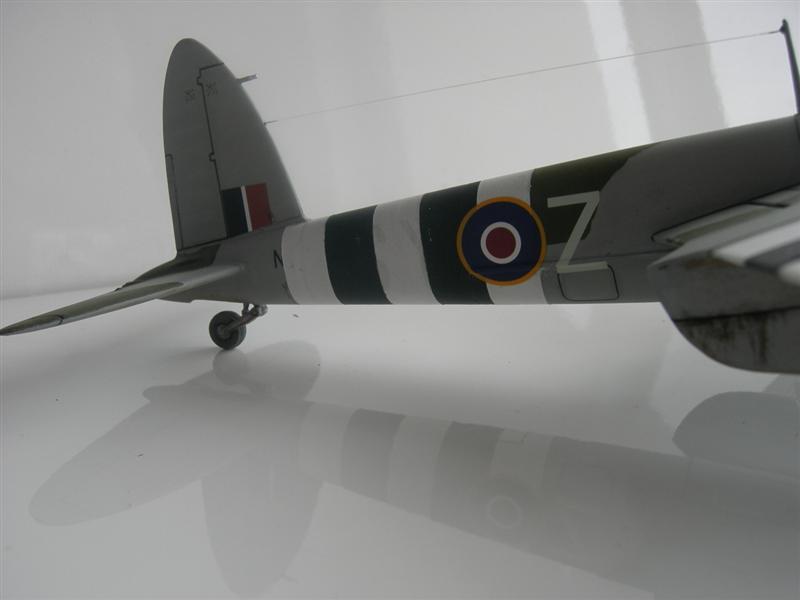 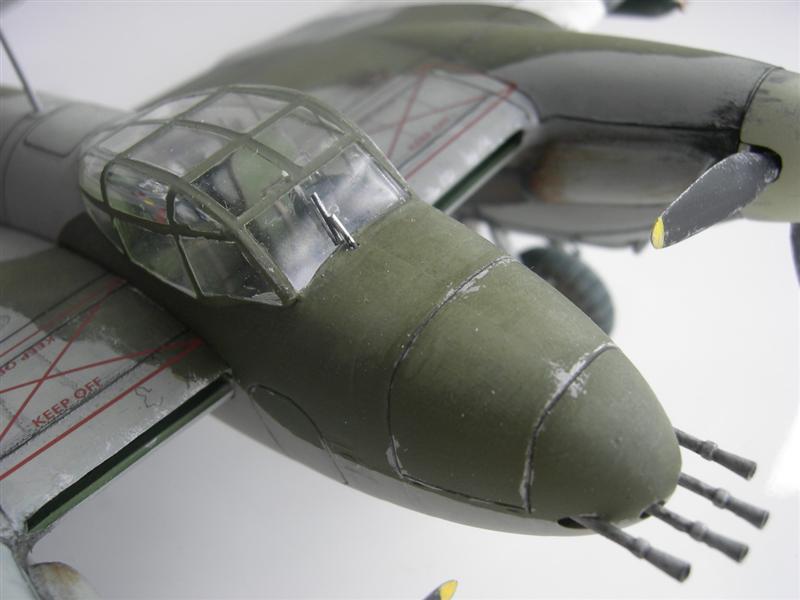 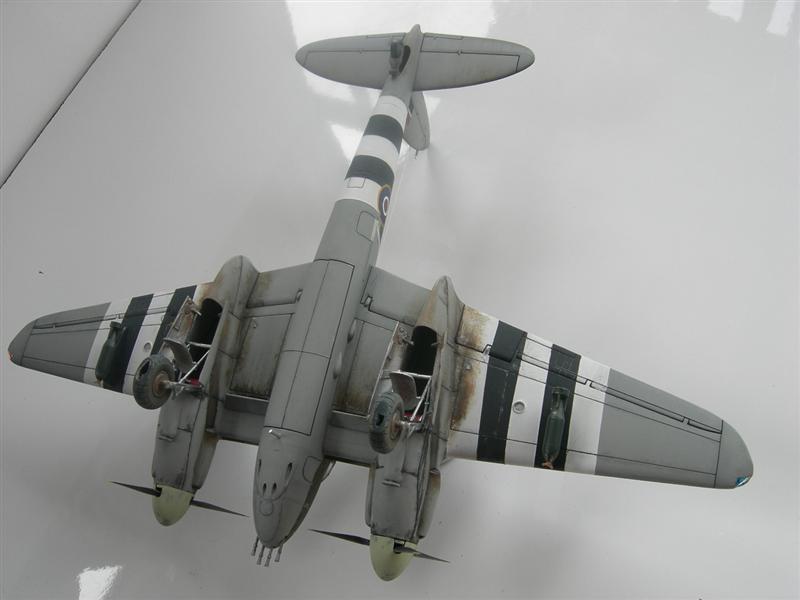 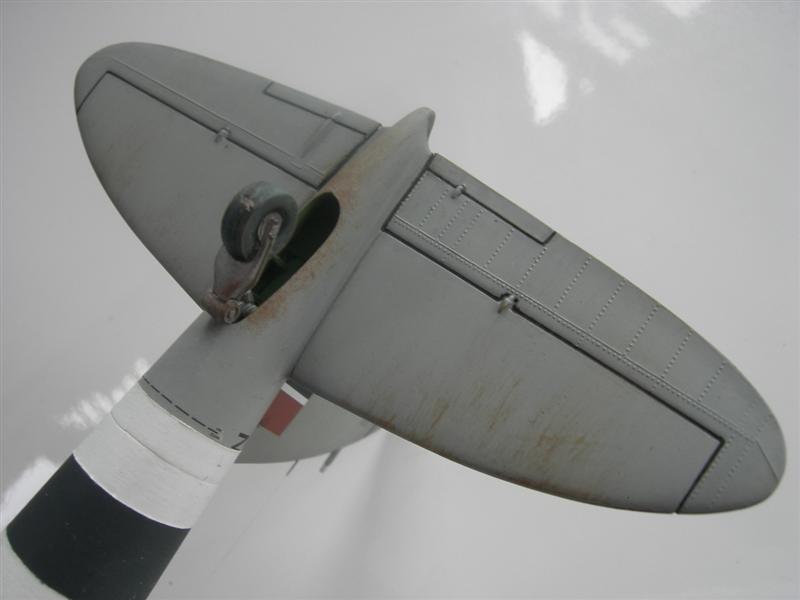 I've enjoyed it immensely and I'll certainly need to find a different way to paint D-Days stripes if I enter any more. I have in mind a Mk III Seafire for which I already have the decals and Special Hobby apparently make an excellent kitset of it.
Cheers
Wally.
Contact This email address is being protected from spambots. You need JavaScript enabled to view it.
My preference - WW2 RNZAF & Pacific Theatre, Allied & Axis, ETO, Mediterranean, AFV & figures
I enjoy doing research

Less More
7 years 5 months ago #32 by Maarten
Replied by Maarten on topic Vintage Monogram 1/48 Mosquito FB VI
Tally-ho !!
Looking Good
'' I could sense things were about to kick off, so I got out of there !''

Less More
7 years 2 months ago #34 by RossMack
Replied by RossMack on topic Vintage Monogram 1/48 Mosquito FB VI
Nicely done, Wally. It's nice to see another Mozzie.
Even if the Monogram.

I have 2x Airfix and 1x Monogram/Revell (1/48th). Built the Monogram waaayy back when, for some local contest.
Not at all worried then about a couple seams, or painted frames!
Aaaahhh, happy days.

I'll have to rattle me dags on the NF II. It's together, merely waiting for paint. Would be great to have something to show for 10/06.

Regards
This email address is being protected from spambots. You need JavaScript enabled to view it.
There are two types of aircraft: fighters and targets

Less More
7 years 2 months ago #35 by Kiwimav
Replied by Kiwimav on topic Vintage Monogram 1/48 Mosquito FB VI
Very nice build Wally. She looks awesome m8
SO, Seafire next up then eh?
Looking forward to seeing that to 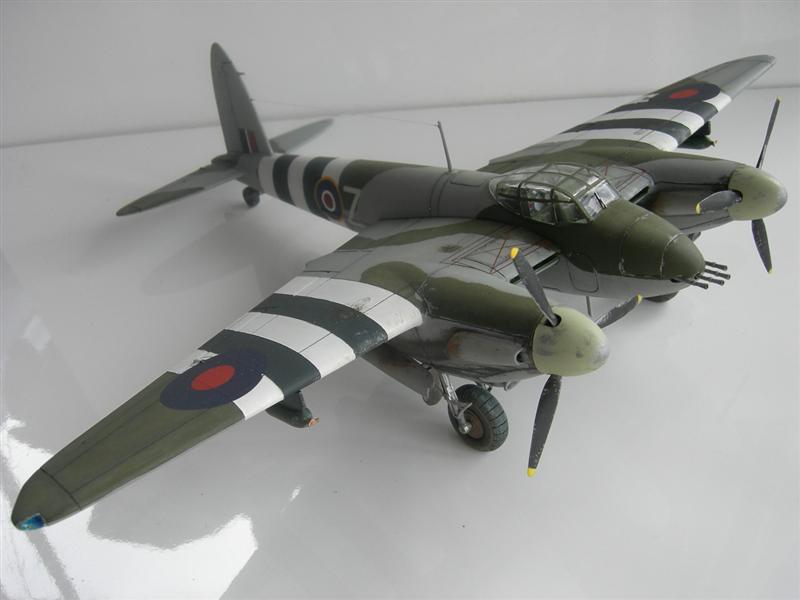