I'm using two spares from a Tamiya Panther G that I have lying around as my test model. One is a part of the schürzen, another is a thingumybob to do with the wheels. I've chosen these two parts for the different shapes and structure. 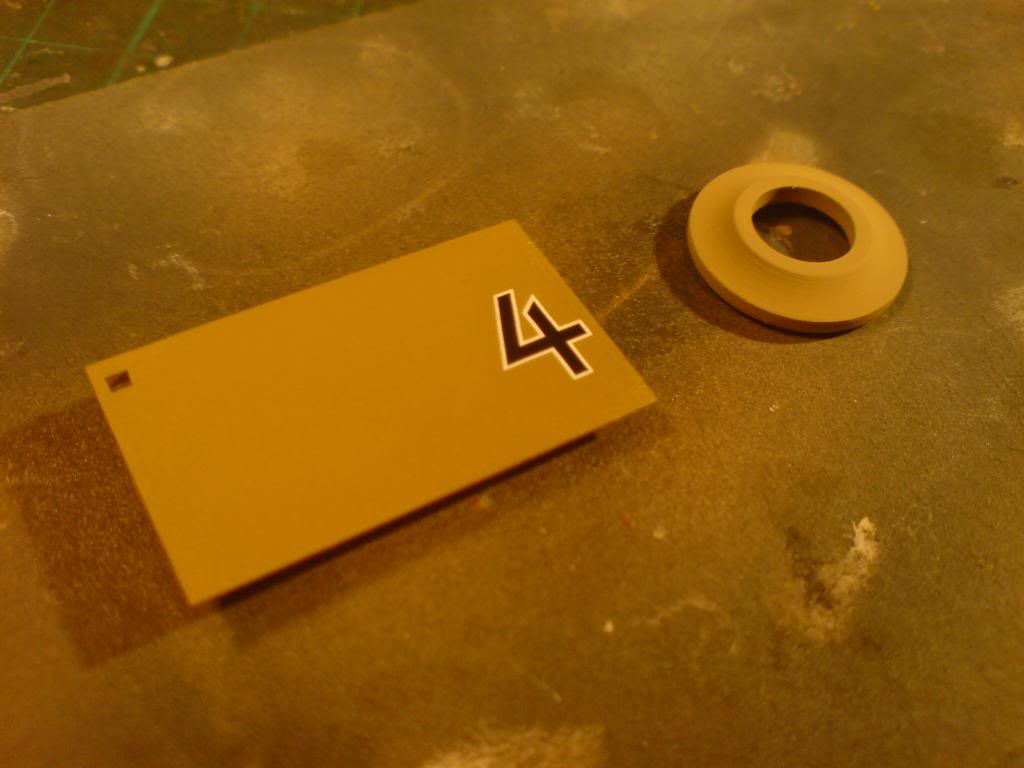 And here they are above. I've included a decal on the plate because I believe the decals also require some attention when it comes to this process. So what I've done is to paint each part with straight Tamiya 'Dark Yellow' acrylic, a shot of Tamiya clear gloss, the decal and then a sealing coat of clear gloss again. The circular part is just plain old dark yellow paint.
You may notice a difference in finish on these parts because of the gloss coats but in the process of my modelling, subsequent weathering will even that out to some extent.


I think it helps when modelling to think about how the real thing got to look the way it did. So, for the plate we'd have bare metal, red-oxide primer, dark yellow paint and then the two colours used for the numeral...all stacked one on top of the other. In other words, scratch the dark yellow parts and you might expose primer or metal depending on the depth of the scratch. Scratch the number and you might expose dark yellow paint, primer or metal depending on the depth. For the purposes of this thread and my own modelling, I pretend that all the scratches go through to the metal except for the ones that have damaged a decal (or painted on number in the case of the real vehicle).

Start from the top layer (the number) and work your way 'deeper' into the layers of paint, primer and metal. 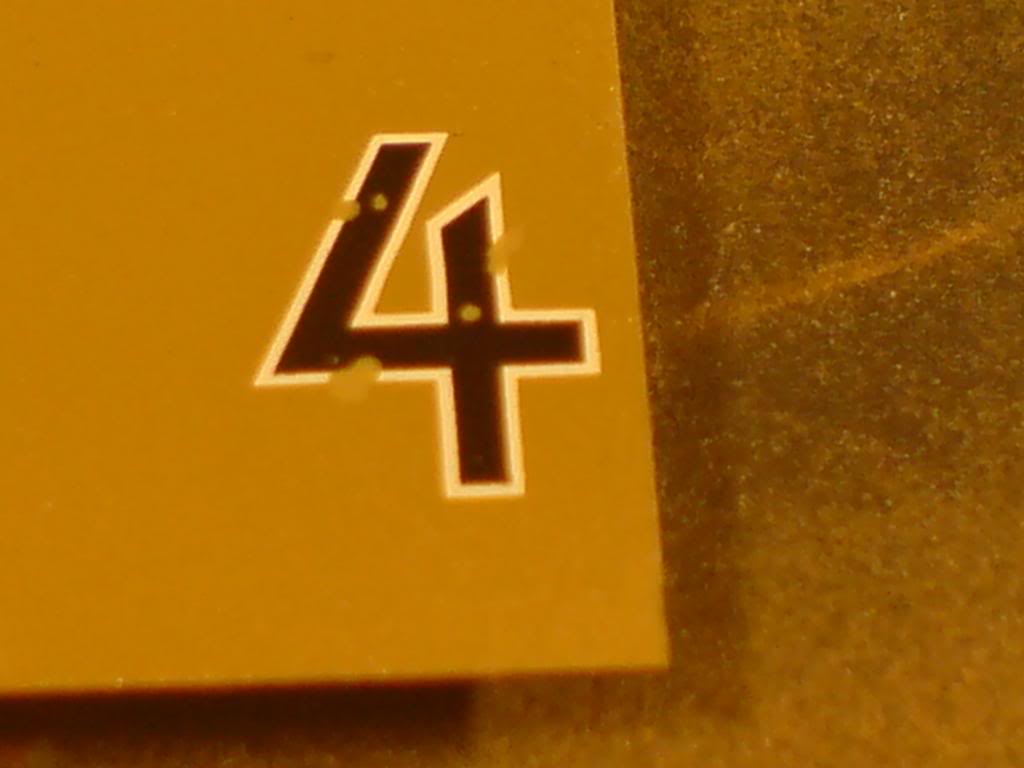 Above you can see that I've added some chips of plain (50/50 Tam Dark Yellow and Tam thinner with a drop of Windex to extend the workability of the paint...dries very fast) dark yellow. Thinner paint allows you to touch the surface very lightly and still leave a mark. I use a 000 brush with a pointed tip. I try to get marks that aren't rounded or 'blobby' because they look more like blobs of paint than chips.

As you can see from the lower pic I don't always succeed with that but it's not a critical thing. I like to concentrate a little on the edges because I imagine the paint of the number being slightly raised from the rest of the surface, allowing objects to 'grab' or 'catch' on that tiny lip and pull off a flake of paint.

After this stage is dry, it's time to go onto the main areas. For this I switch colours.
I said that I always 'go through to the metal' with my chips and that's for two reasons. First and slackest, it's easier. Second, I think that a kaleidoscope of colours doesn't look as appealing to the eye in this context. Some may disagree and I'd suggest some experimentation.
For my chip colour, I mix an approximately 60/40 mix of Tam Red-Brown and Black. I also thin it about 50/50 with Tam acrylic thinner and add another drop of Windex. As stated previously, the Windex keeps the paint fluid for longer and allows me to reproduce sharper edged chips. You really need some angles rather than blobs which to my eye, don't look quite 'chippy' enough. I mix a small amount because even with the Windex, your paint will only be workable for about ten to twelve minutes when you'll need a new batch. Work on a panel or section at a time and don't be too fussy about getting all your paint batches exactly the same colour...doesn't matter. 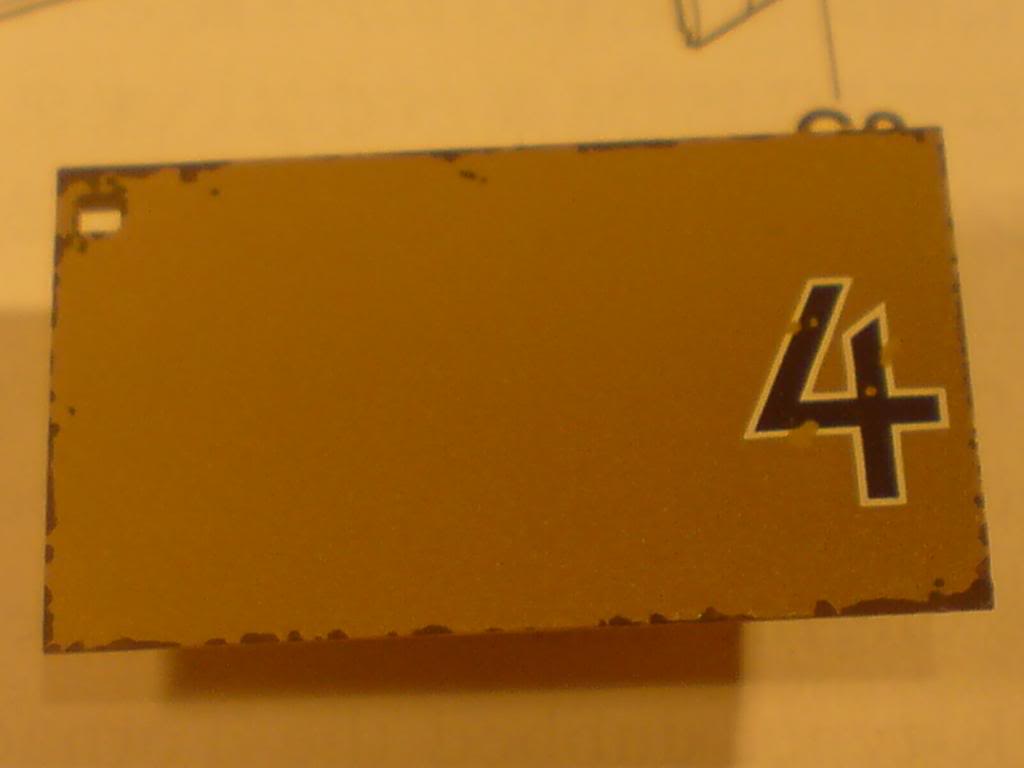 Above you can see that I usually start around the edges. To do this I dip the brush in my paint and then use the shank of the bristles rather than the tip. I have the surface you can see facing up when I go. The more pressure you apply to the edge of the part with the shank of the brush, the deeper (away from the edge of the part) the chip will go. So where there's more paint missing, there's been more pressure applied. As you can see, I don't 'remove' all the paint from the edges. Try to make your chips go from very thin to thicker to very thin again as it extends along the edge. 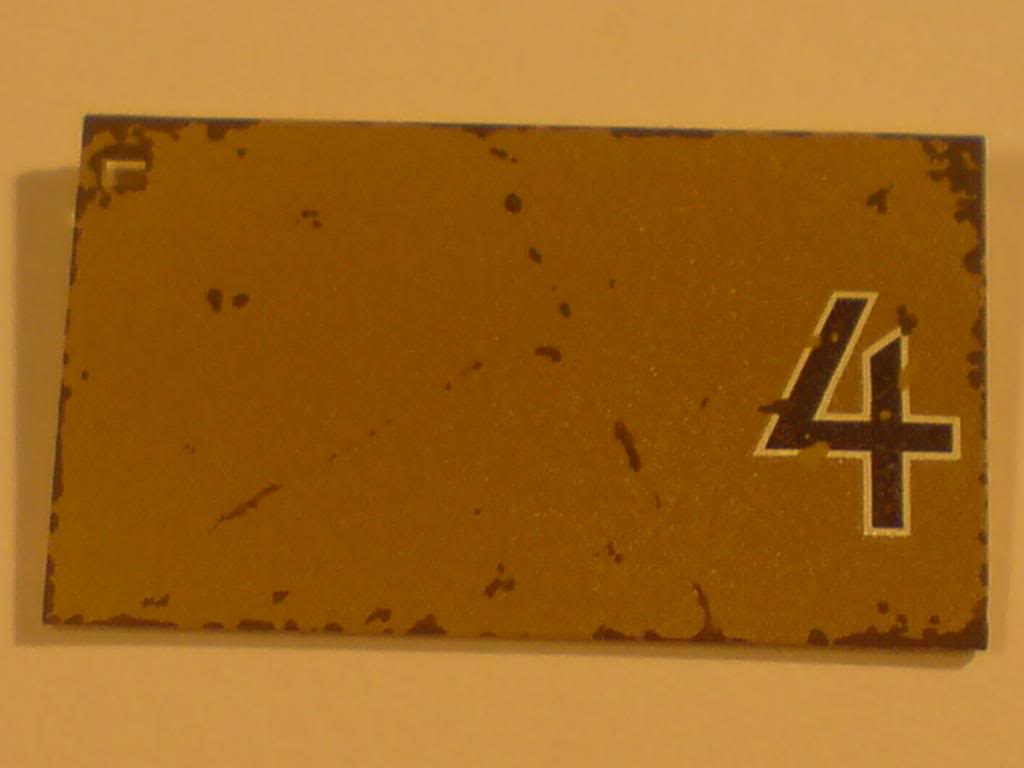 The thing that I found makes the effect work best are the 'scratches' I've added. If you start to get a lot of rounded, blobby chips it's time for new paint. Trying to resurrect the old batch doesn't work well I'm afraid.

Another thing to try to achieve is what they call 'negative chips'. I'll let the pic explain them. 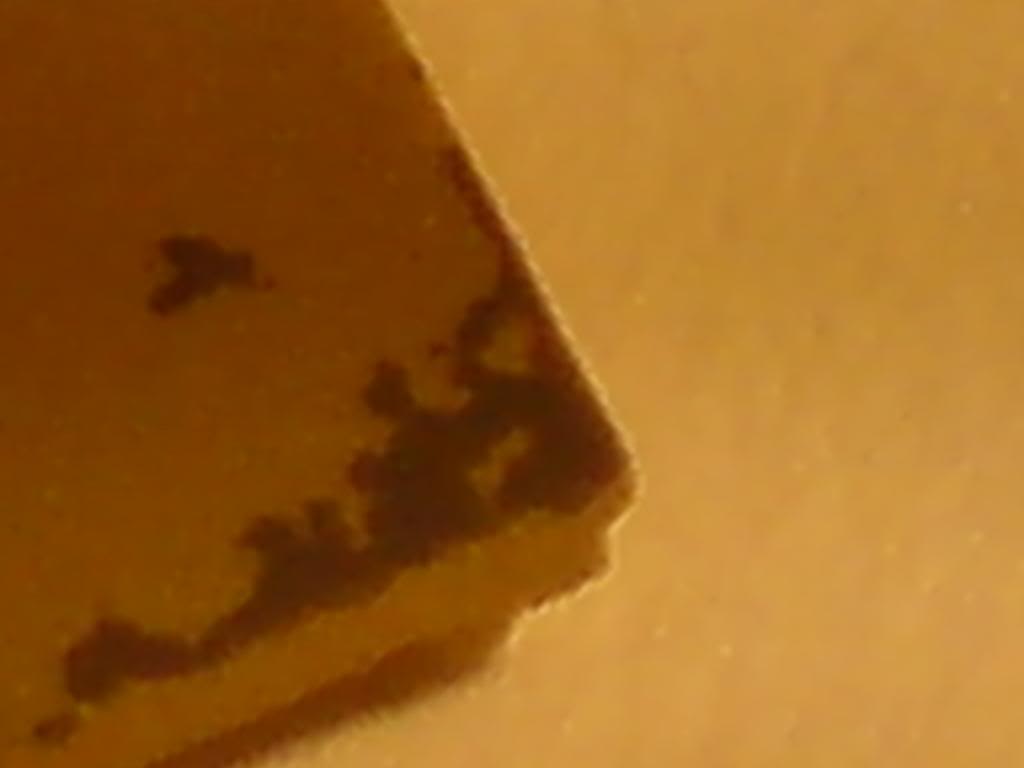 Above you can see (in the terrible pic, sorry) that there are two pieces of original dark yellow left isolated inside the large chip at the corner. These are the negative chips. I usually try to leave these as the original base coat but you can always go back and add them later with your base colour appropriately thinned. These are a pretty important effect because I think they add a vital element that the eyes register as 'real' rather than 'model'. Check out your local dozers and diggers...look at chip structure, negative chips, colours, scrapes and scratches. I take photos when I can...great reference material for a job like this.

After all that, this is what we have...

Repeating myself pic-wise I know but we're almost done with this part.
The next thing is to add an illusion of depth to the chip. Sounds strange I know because in reality, the depth of the chip on the real vehicle would be measured in fractions of millimetres, but what we try to get the eye to believe is that the chips are metal under the paint rather than what they are...painted on chips.
To do this, I mix up a very light version of my base coat colour...say 60/40 Dark Yellow and White. Exact proportions aren't really important.
Lets imagine that our models are most often viewed from above. If our eyes were powerful enough, the edge of paint that surrounds each chip could be visible as a raised surface perpendicular to the surface of the vehicle. Or, imagine you were tiny and could stand inside the chip. You would have to step up out of the chip onto the base colour. It's the riser of that step that we will highlight now. We'll do the risers that face upwards since the light of the sun comes from above. 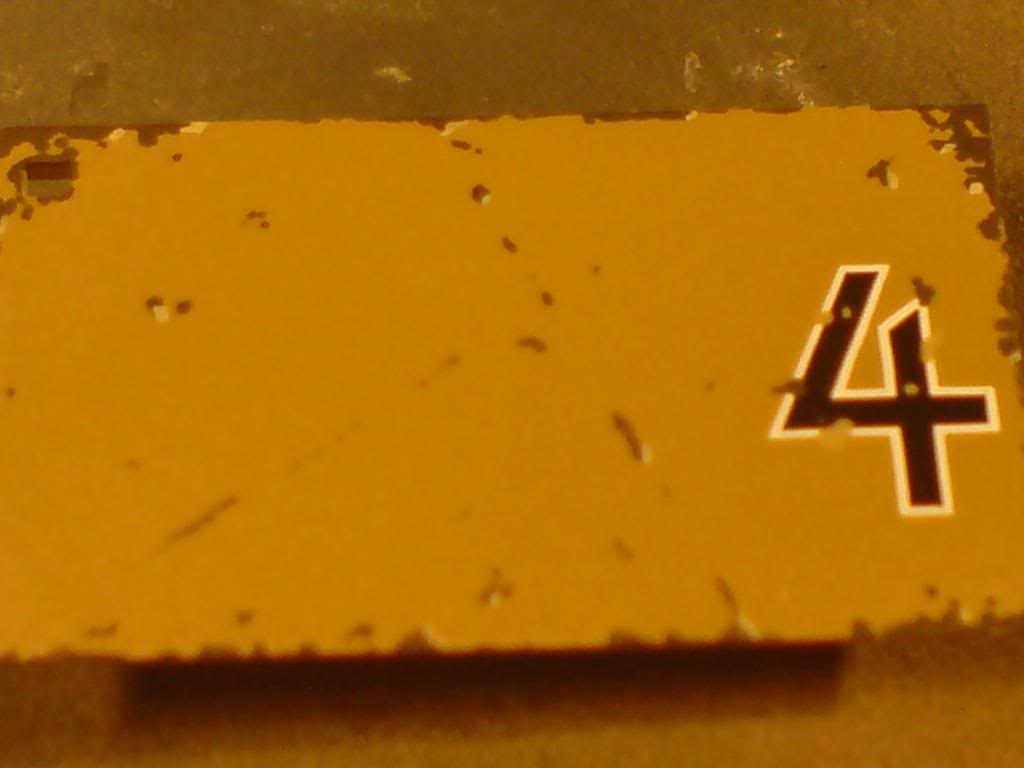 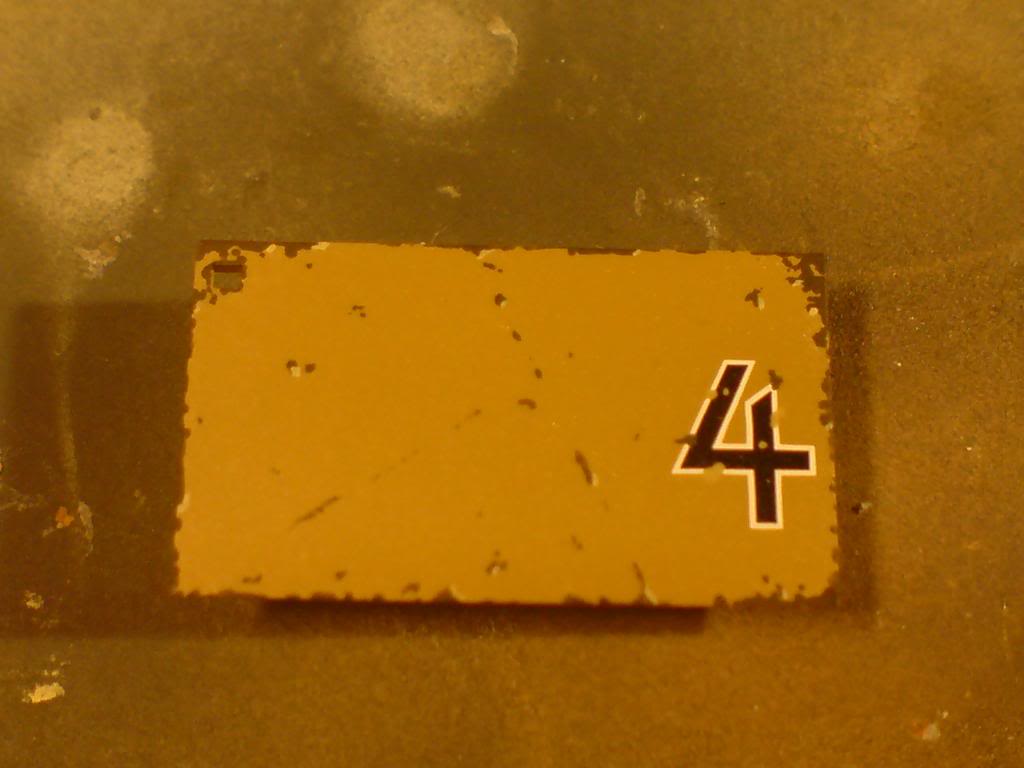 Sorry the pics aren't great but they'll do the job.
I don't by any means suggest that you'll need to add highlight outlines to each chip...just do a couple of the bigger ones and see if it needs more. The 'model will tell you' if it does. Start with less, add more if need be. As you can see, you don't need to be too precise, I've done better on some than on others but I think most viewers won't spend much time scrutinizing each chip. The whole thing adds up to an effect.

And now to the other part. I chose that to illustrate how we can use this technique to emphasize the shapes we find. 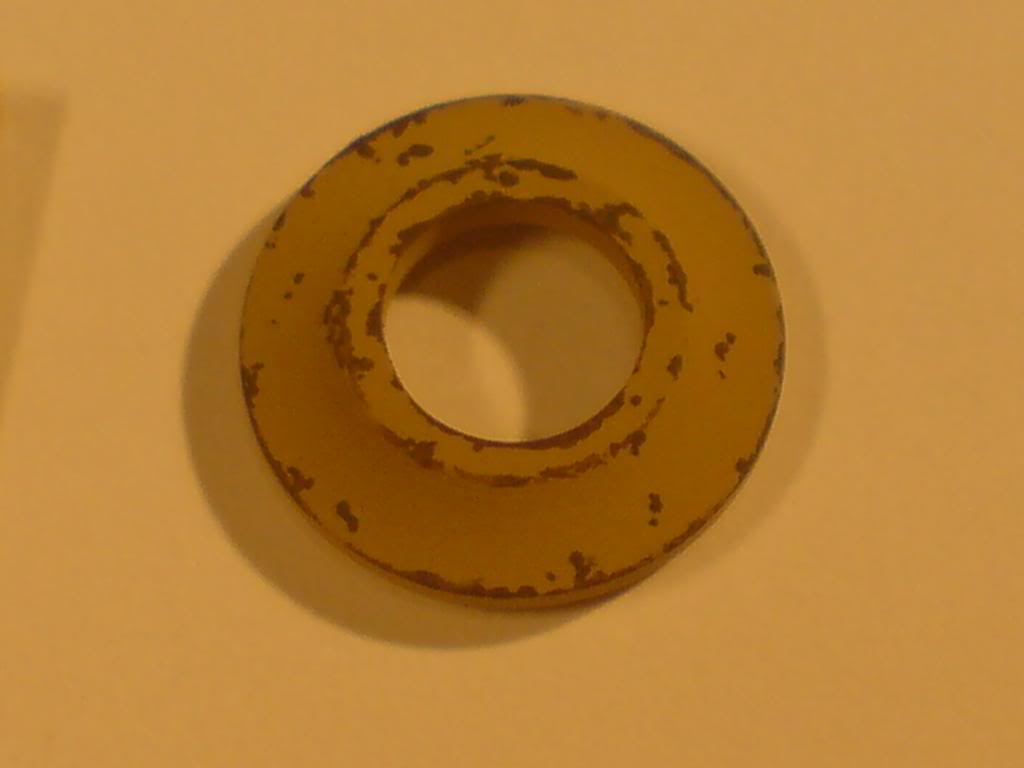 Above is the round thingumybob with just the chips added exactly as described above. On the edges I used the shank, on the flatter surfaces, the tip of the brush just as I did above. Think about what areas would receive most wear. This is where it helps to know how your subject works and what parts did what in order for your subject to do what it did in real life. I've chipped up the ridge on this part...I dunno what it does but corners are a magnet for chipping. 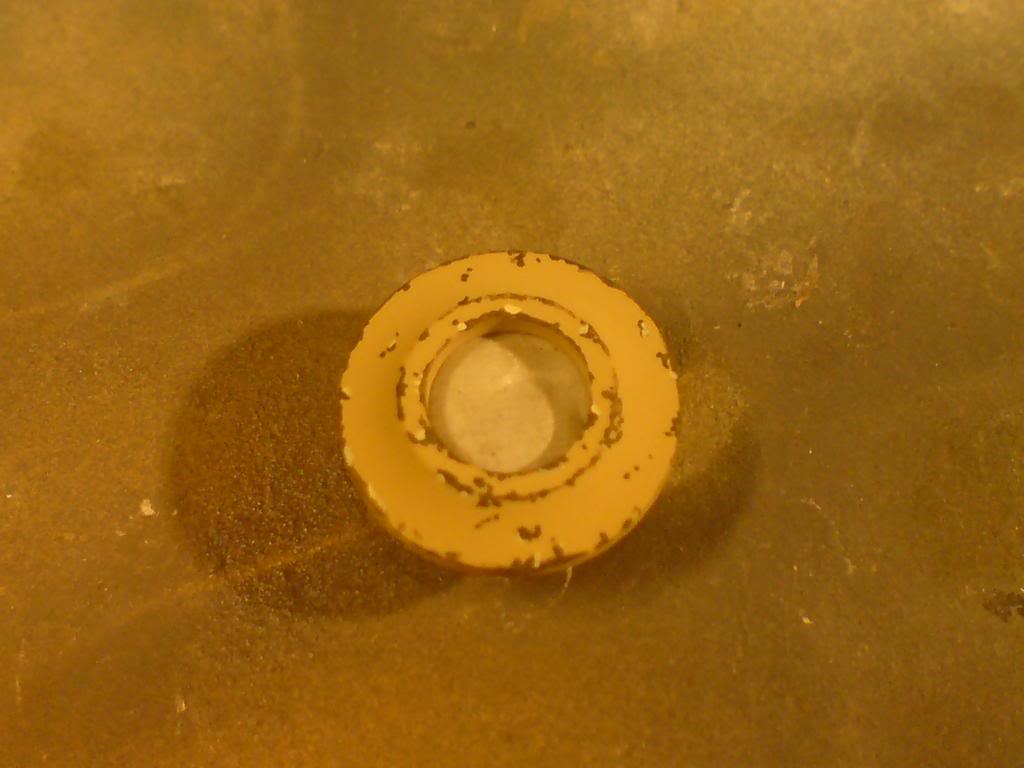 And with a few highlits added. If you look, there are also negative chips on this part too.

It's a pretty simple technique. I think the hardest part for most people is that it's very tedious to do a whole 1/35 vehicle like this and also very time consuming. 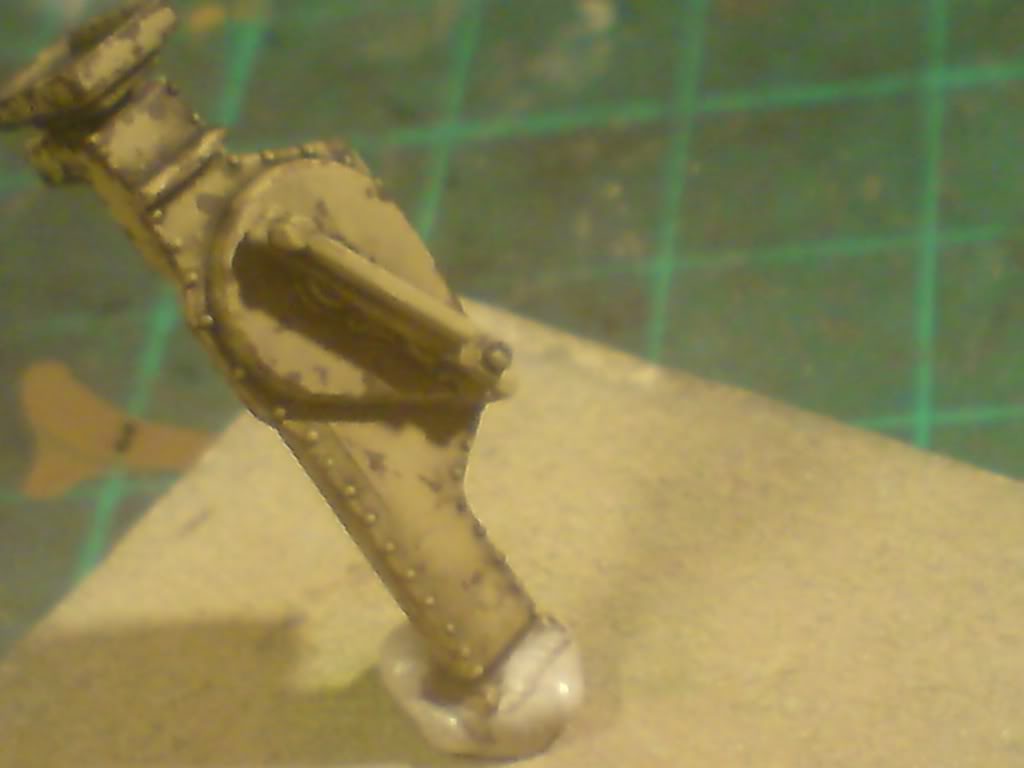 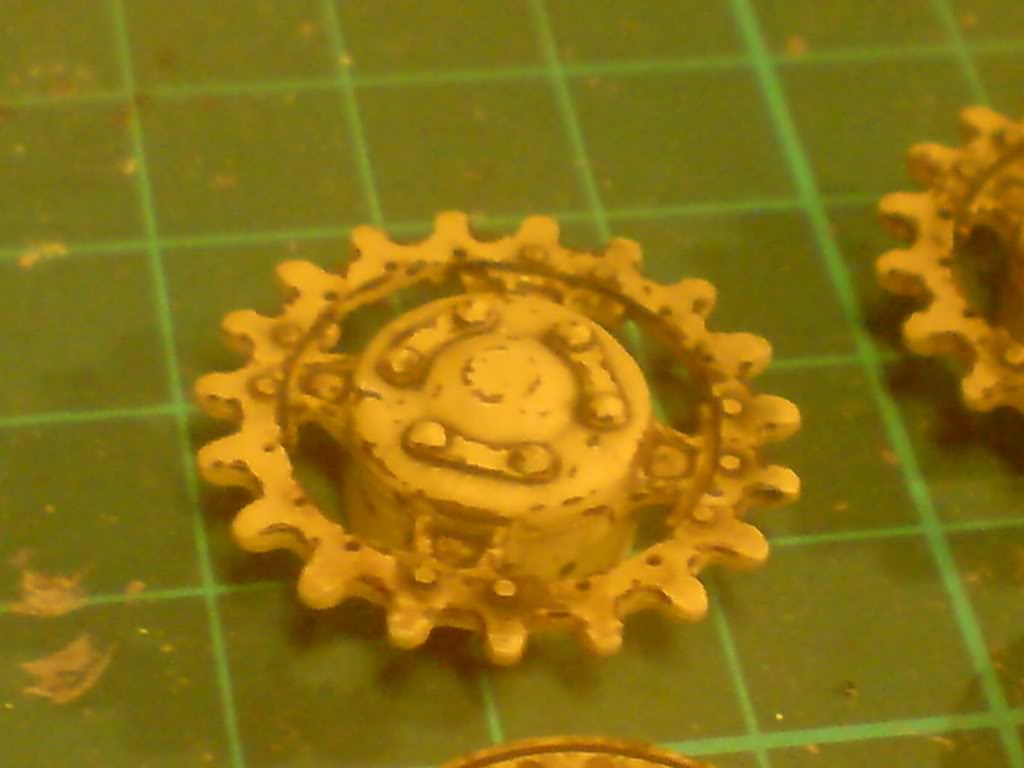 The above two pics are from my Elefant. The whole vehicle took me four nights to chip but it's a rather large model.
I think it really helps to know your subject (often I don't) to know what areas would get more wear and tear. How old was your subject? What did it do? Where did it do it? How did it work? How did the crew operate it? If you have some idea or can make up something plausible, you're well on your way to painting better looking wear and tear.

Of course there are other methods. Rather than painting each individual chip by hand, some people use what they call the 'sponge method'. This is where you take a piece of that sponge that you might find in the kitchen or even that stuff they use for packing...it's often black or grey. Tear a piece off so that you get a random surface. Dip it in the paint and the dab most of the paint off on a piece of paper. You can then touch the ragged surface onto the model leaving somewhat pleasing chips. I experimented with it... 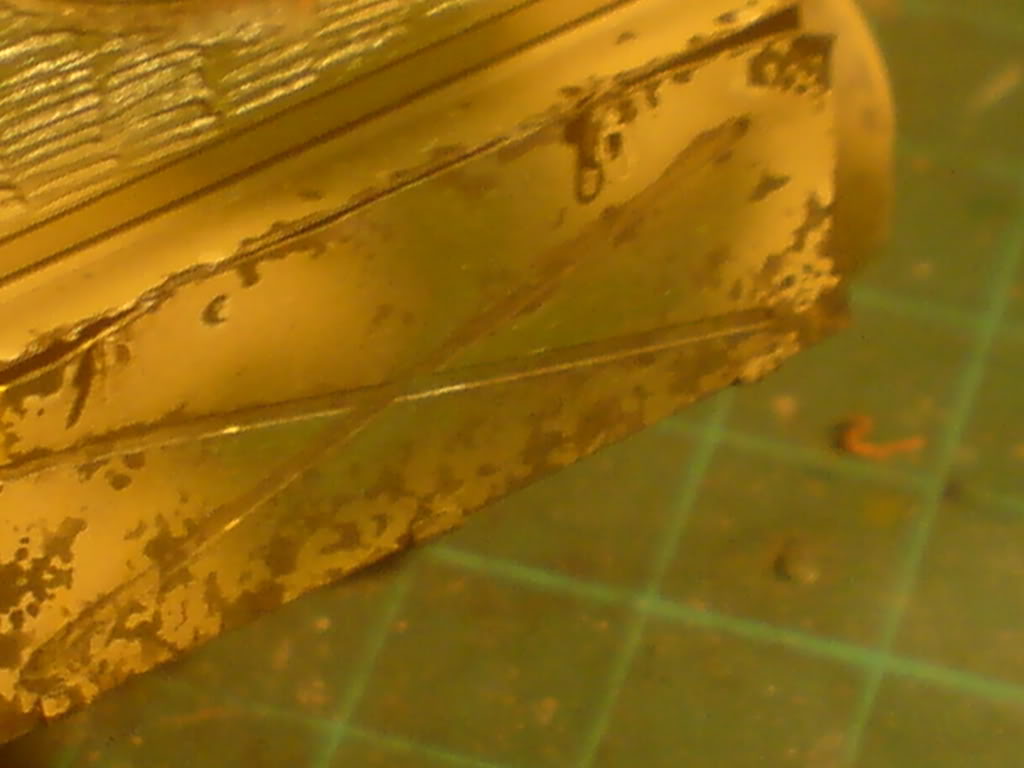 The tool box on the rear is done this way. I'm not so happy with this method but that's just my taste. I'm also a control freak when it comes to modelling. This method creates a random pattern but unless you use a few different pieces of sponge, the dabs will become repetitive and a pattern will emerge...not desirable in my opinion.

So, that's it. Any questions happily answered. I suggest experimenting on either a cheap kit you don't mind ruining (although I doubt you will) or some spare bits and pieces. Sorry for the crappy pics but they'll serve.
Happy chipping.
Peace.