"It was many years ago that I first started modeling plastic kits and in those days, photo etch had yet to become a twinkle in Mr Griffon's eye. We had to make do with chunky detail due to the limitation of injection moulding and while that has made astronomical leaps forward in recent times, there is only so much you can make with plastic. Small brackets, mesh, tool clamps etc lend themselves perfectly to being created using etched brass.   Like some people, when I first started using PE, I struggled - especially with those really small parts. Even when I didn't feed them to the carpet monster, the parts often stuck to my fingers rather than each other when using superglue. And when I finally got the parts together and in place on the model, they'd either part company due to a misplaced finger or fly off into oblivion during the painting / weathering stage.   Oh how I used to marvel at the skills of those people who would effortlessly solder parts together creating an unbreakable bond that only solder can create. My only real experience previously was soldering wiring loom connections on my race car - hardly precision stuff.....   Then one day, after one to many frustrations with gluing PE together, I decided to do something about it. I mean, how hard could it be? Really....?   After much research on the net and asking for advice, I took the plunge and went shopping for the tools of the trade I would need. A trip to the local electronics shop came up with most of what I needed. Gas soldering iron, solder paste and flux are the key ingredients with a few other things thrown in.. 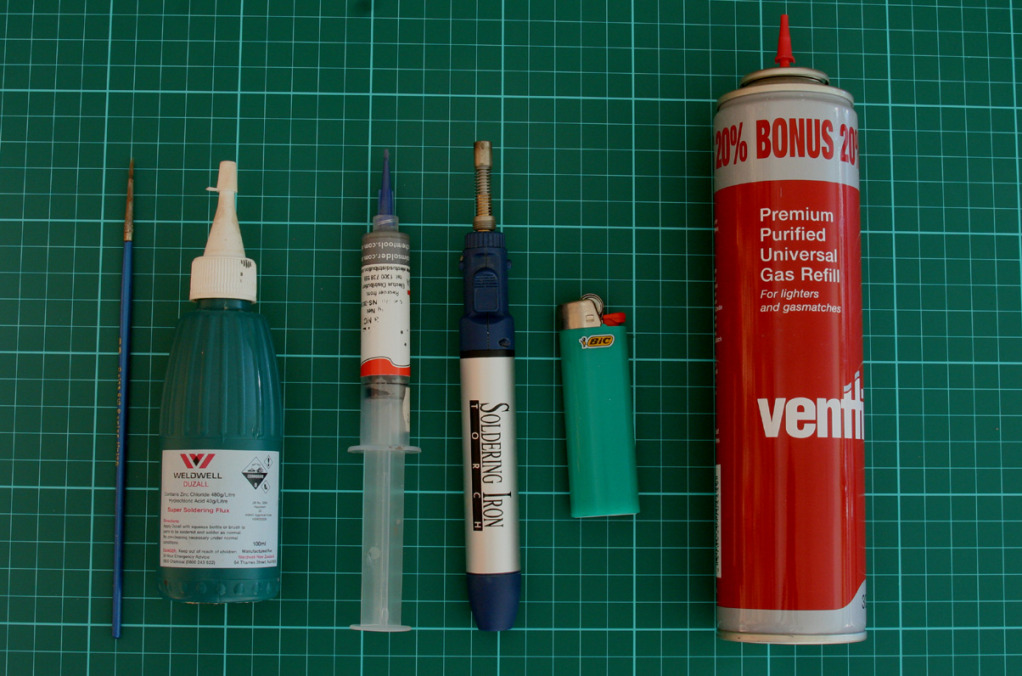 Brush for applying flux, liquid flux, solder paste, butane gas iron, lighter and butane refill     The flux I purchased at the local hardware store and I just use an old brush to apply it. The solder paste is a lot more expensive than that on a reel, but is much easier to use and lasts quite a while as you don't need much per join. The butane gas iron gives me better control and melts the solder and heats up surrounding PE a lot quicker than a 'standard' type of iron. Lighter is for source of ignition and the spare fluid is readily available from most corner shops. 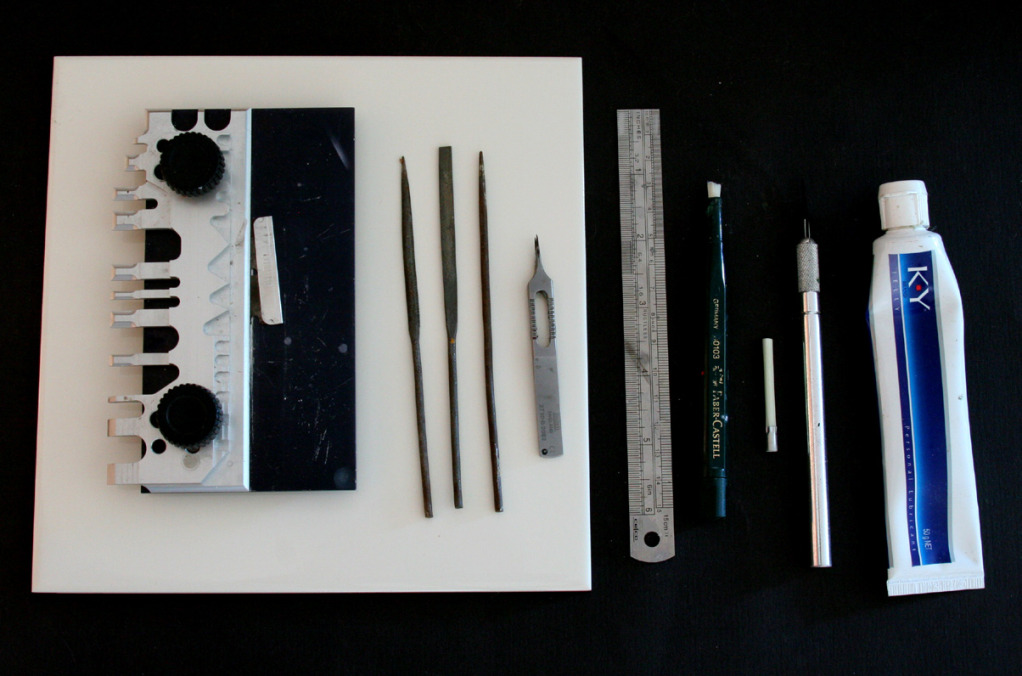 Tile, PE forming tool, files, tweezers, steel rule, glass fibre pen + refill, knife and lubricating gel (yes, that is correct!)   Other tools are also useful for the process. I use a kitchen tile as a work base when using flame, the PE bending tool of your choice, files are necessary for parts clean up when removing from the fret, tweezers prevent you getting burnt fingers, steel rule also helps with bending parts, glass fibre pen for clean up after soldering, sharp blade for removing parts from the fret and the gel is great as a heat sink. 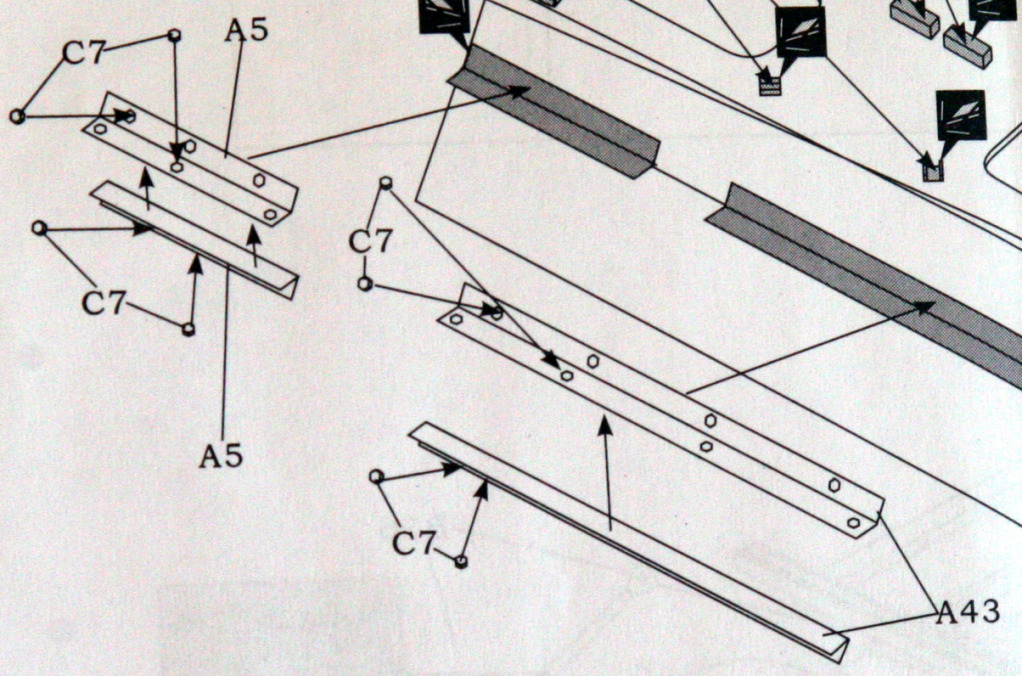 So, let us begin. I'm going to start with some small, but relatively simple parts from a StuG III - C5 and A7 on the instructions 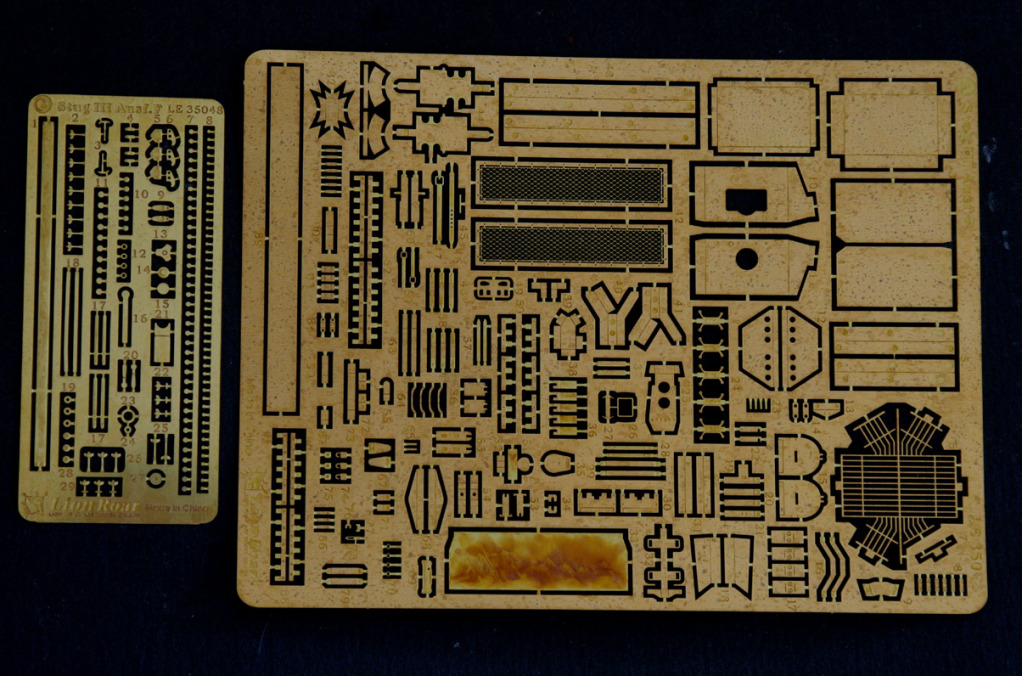 The parts are on separate frets.

It's important to clean the parts with flux first. I find it easier to do this while the parts are on the fret and usually clean the entire fret. I've just done one part to demonstrate the difference when cleaned. 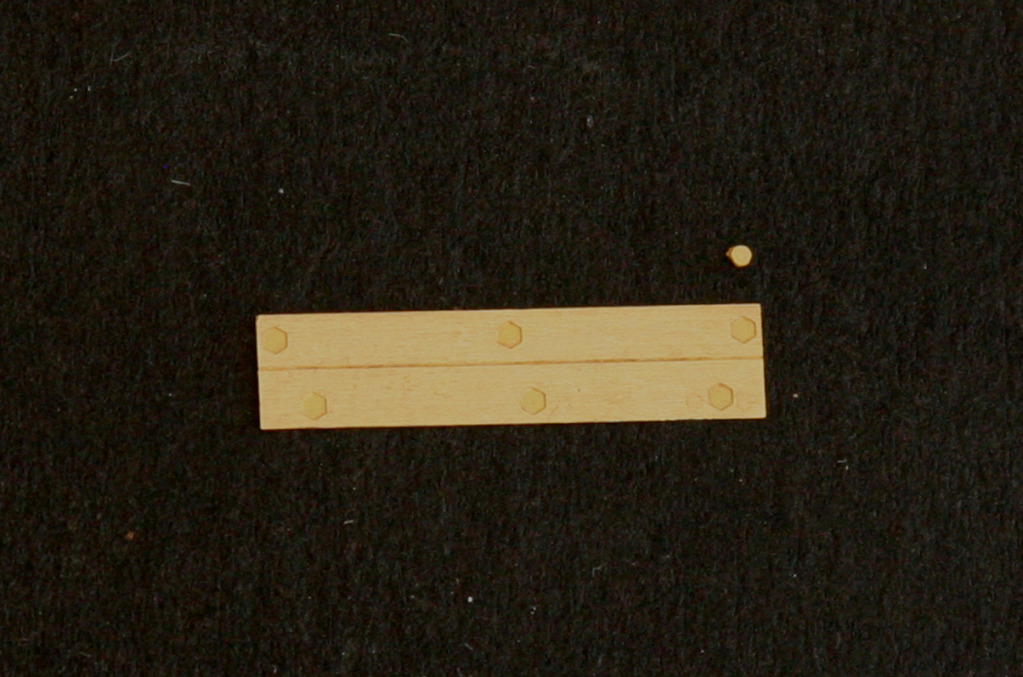 The parts required are removed from the fret 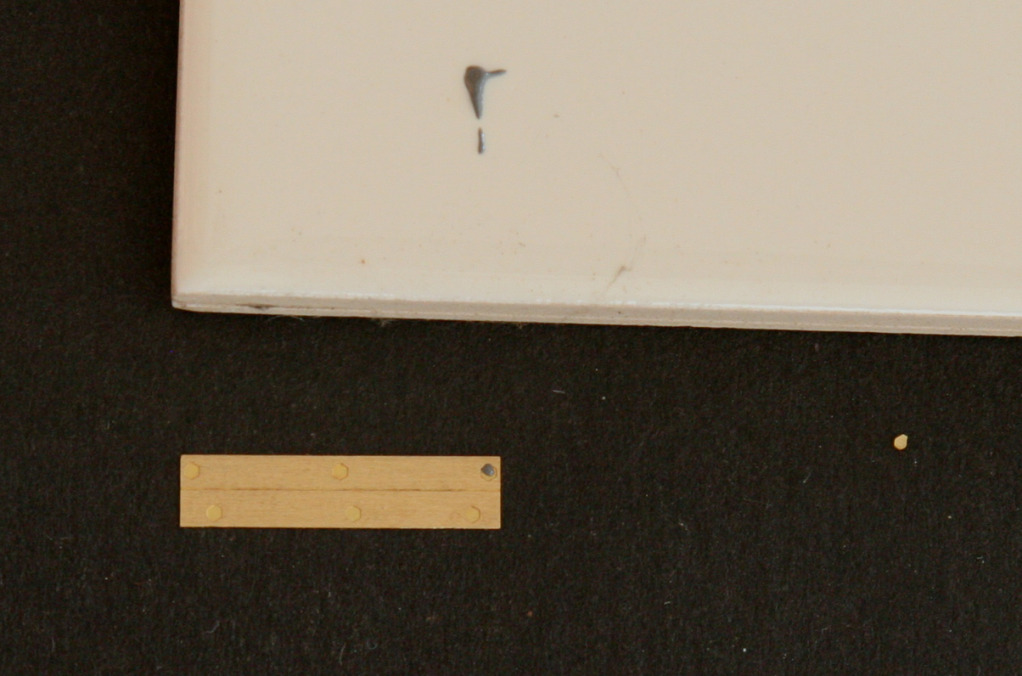 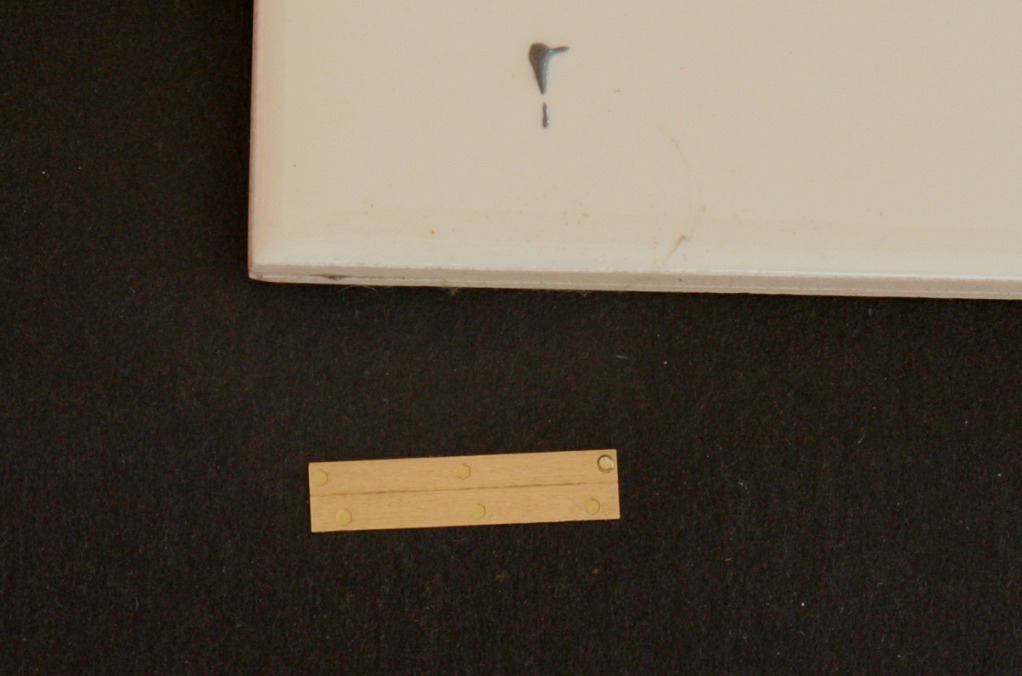 The bolt head is then placed on top

The parts are held securely together with the tweezers. This is important as when heated, the solder turns to a fluid state and easily displaces the parts. The parts are heated until the grey paste turns silver. Note that I normally solder over the tile, but using a black background for the photos. 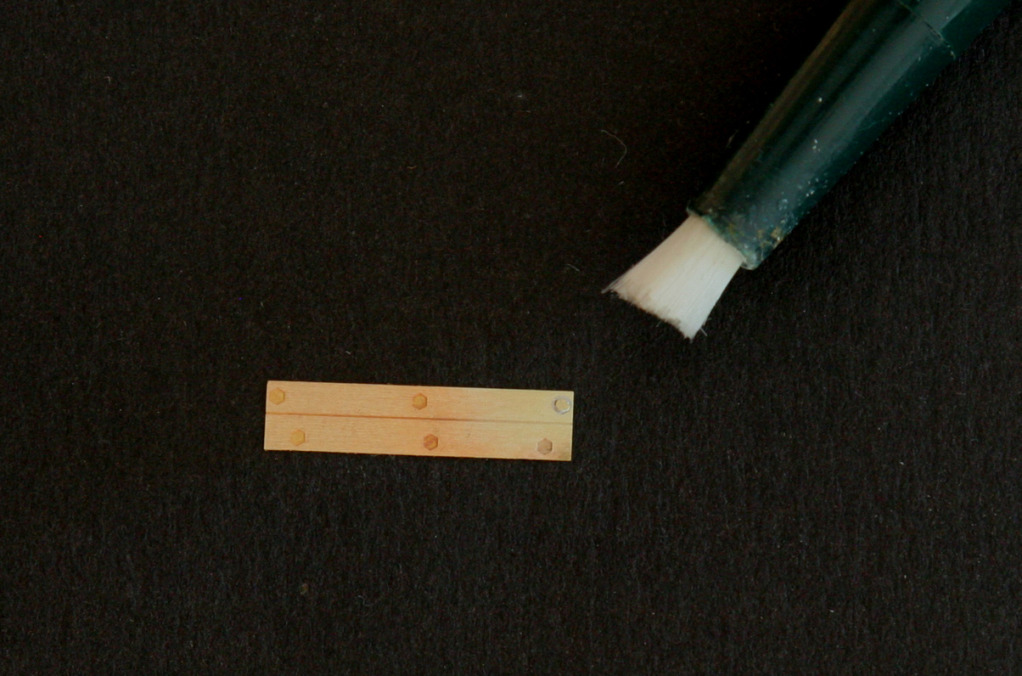 The soldered parts are then cleaned up with the glass fibre pen to remove any residual solder. Be aware that these glass fibres do seem to get everywhere - especially in your fingers if you're not careful. A piece of sticky tape is very useful to clean up the fibres.You can scrub as hard as you like with the pen. If soldered correctly, the part will not come off. 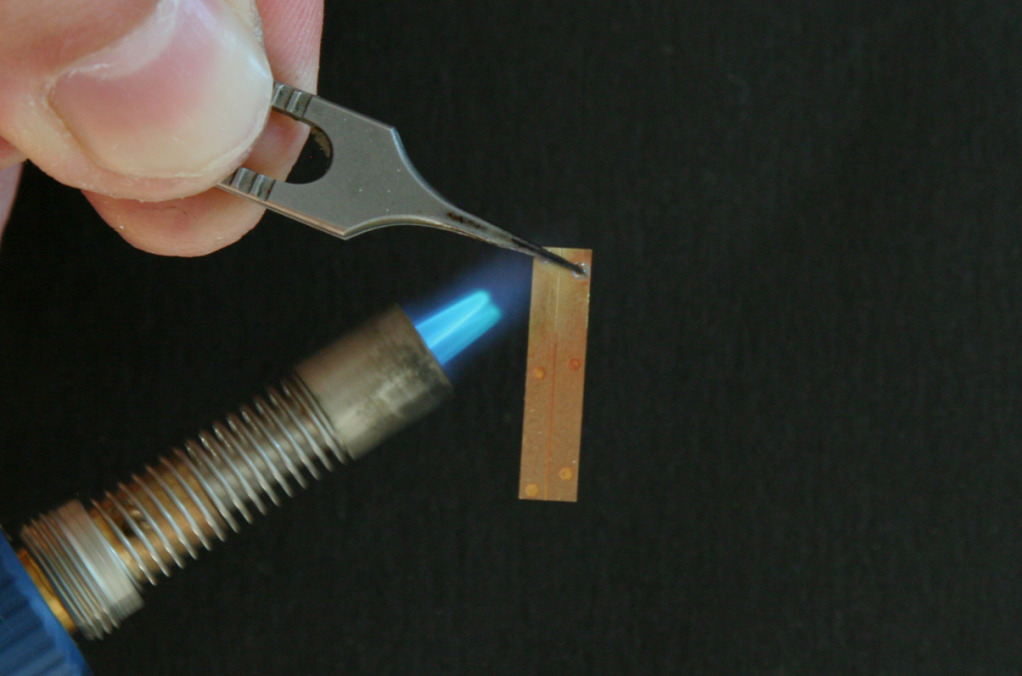 The next bolt head is added. Note that the tweezers are clamping both bolt heads - the soldered and unsoldered ones. Being in such close proximity, the heat will quickly melt the original solder which can cause the part to become displaced.

The parts are again cleaned using the pen. Note the nice clean finish which is achieved.

The process is continued with the rest of the bolt heads. 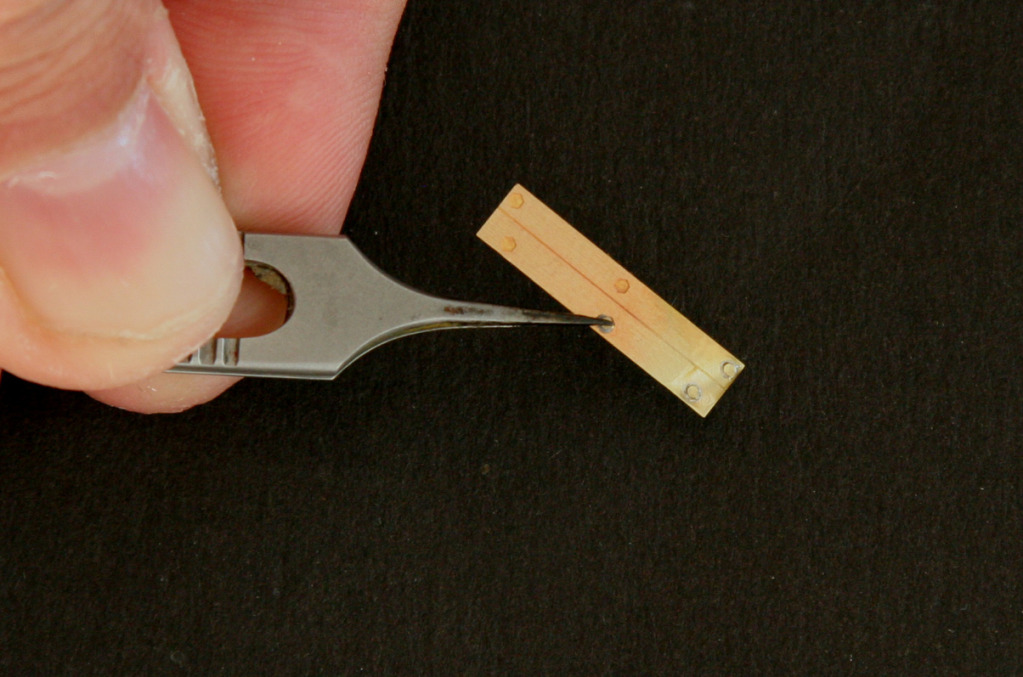 Difficult to see here, but I added some KY Gel to cover the first two parts. This acts as a heat sink preventing the solder from re-melting. I also find that you can use a large drop of water (relying on the surface tension to hold it in place) or even a piece of tussue soaked in water works well. 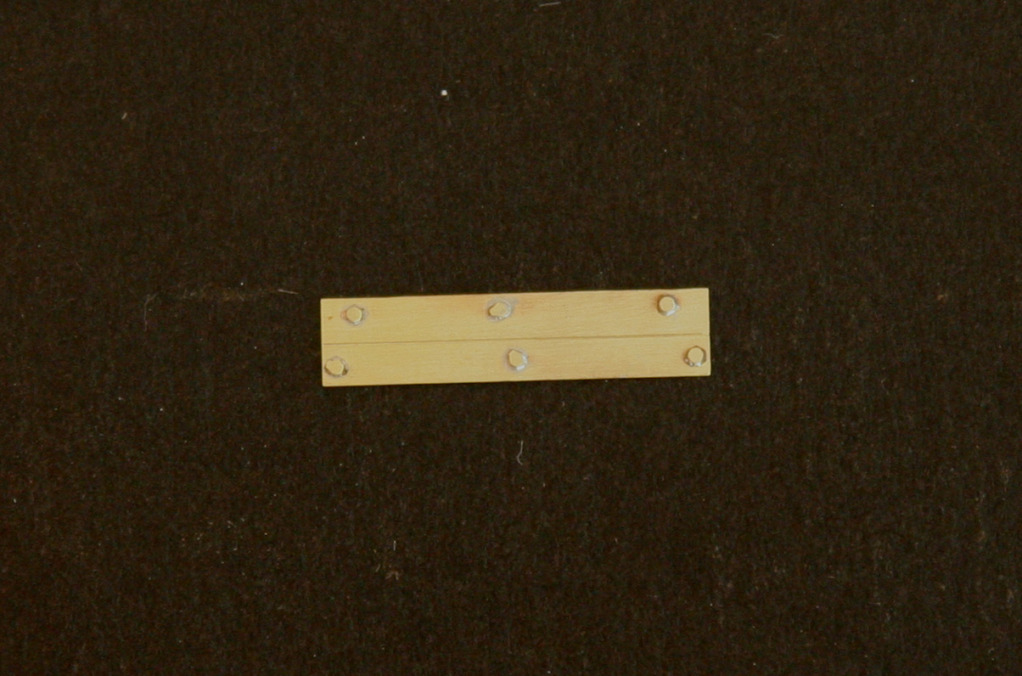 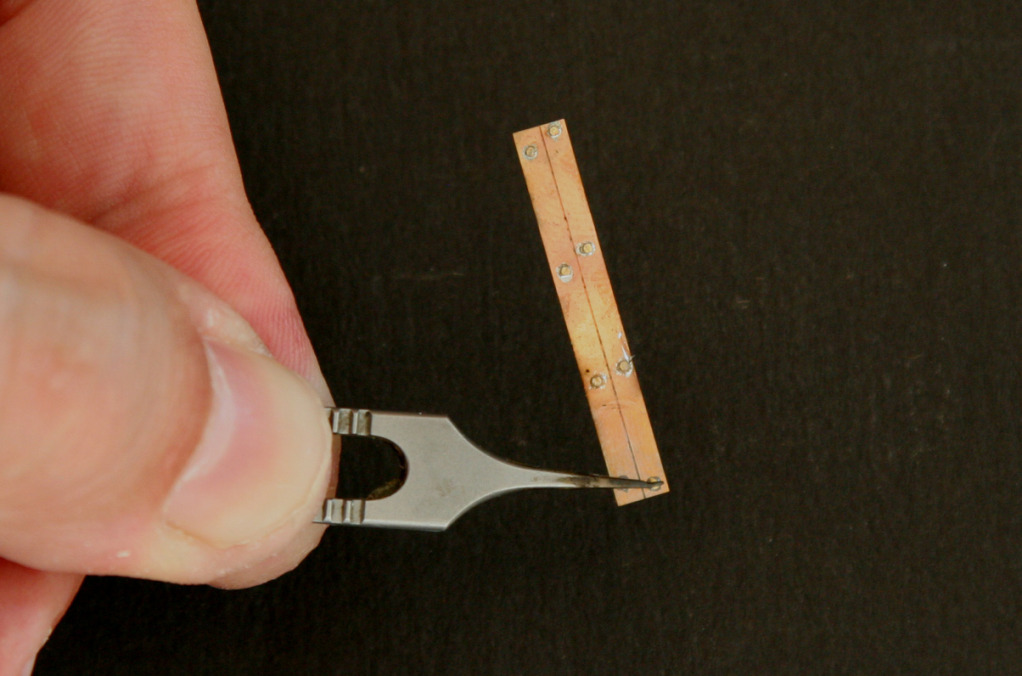 This sequence is completed for the next part. 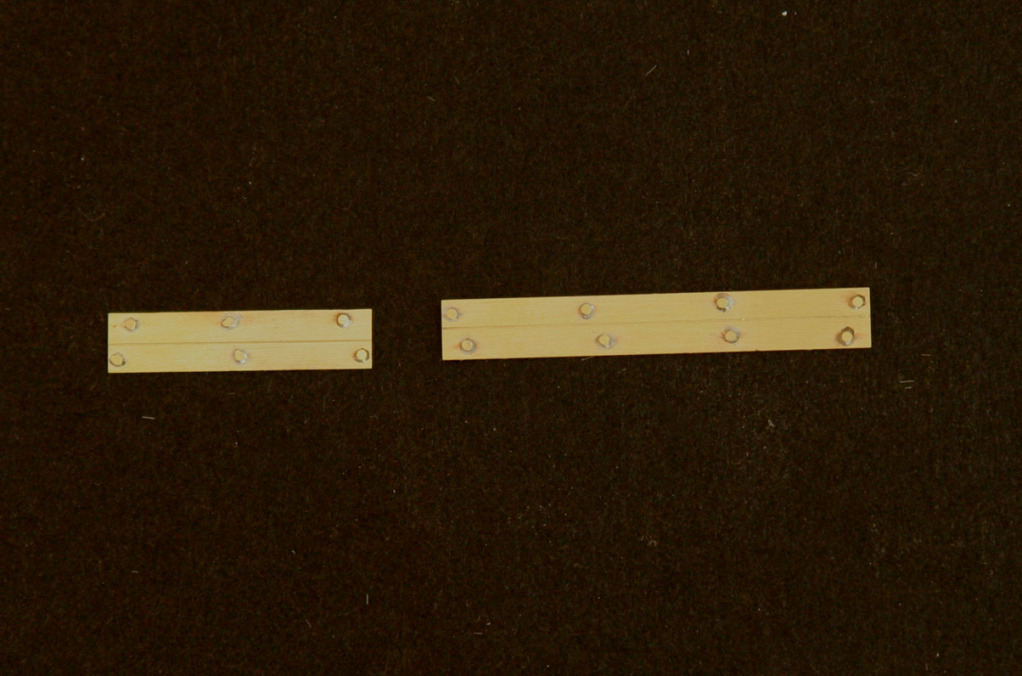 Ready to be attached to the vehicle.

As well as simple parts like that, soldering is especially useful when making box sections. Here we have the bottom half of a stowage bin.

Folded up, each corner receives some solder paste. 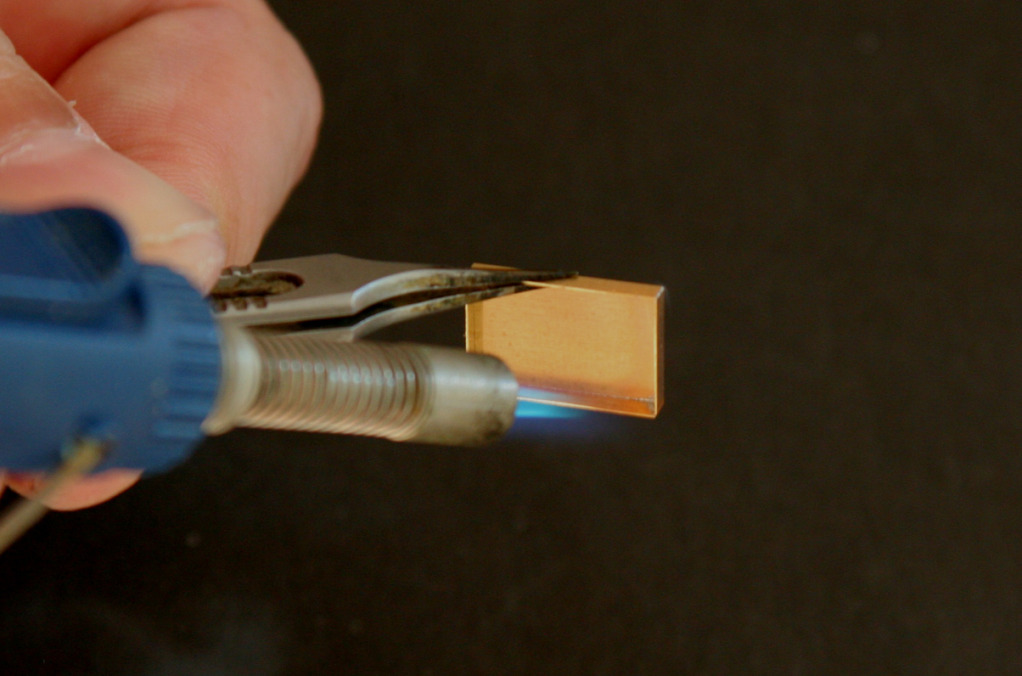 Due to the fluid nature of the solder when melted, hold the box so the solder flows along the join at each corner in turn. 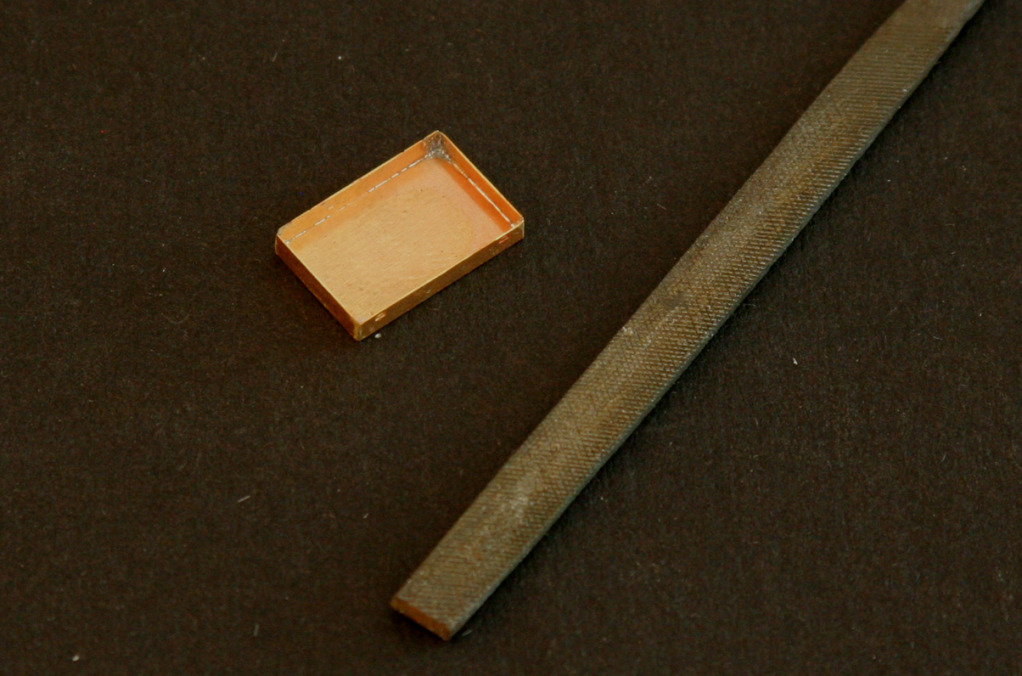 The edges can then be filed so they are nice and smooth with no unsightly gaps. Try doing that when it is just glued!

There are many different ways of soldering and this is just one technique which I have found suits me. I would encourage anyone who uses PE often to give this a go. Experiment on an old fret or spare parts and with a little practice, you'll soon discover that it really isn't that difficult to do. It will transform what you do when it comes to PE and in the end, it really does make life a lot easier and certainly less frustrating. There is nothing worse than seeing all your hard work fall apart when you don't want it to just because that glue isn't strong enough.   Happy soldering."