Sometimes it seems that you can never find enough stuff to load onto a model to create that “lived in” look. Or just to capture the look of a well laden truck, half-track or tank heading off to the fight loaded down with as much gear as they can carry. Which is where sets like this one come in very handy. This is a nice, inexpensive set from Academy that comes on three dark yellow sprues. The moulding on all the parts is nice and clean with sharp detail and minimal cleanup required.

Tasca is a Japanese manufacturer who specialise in Sherman variants as well as a few minor German armour offerings.  They aren’t a prolific manufacturer but what they make are generally condidered to be the best Sherman kits available, and deservedly so. This is one of their latest offerings and it is no exception. The M4A3E2 U.S. Assault Tank ( better known now by all as the Sherman ) “Jumbo” was a variant developed in June/July 1944 to assault bunkers ( hence “Assault Tank” ) and came with thicker armour. 1.5 inches of steel plate was added to the front glacis and hull sides while a new transmission cover also added extra protection ( 5.5 inches in total ) and a new T23 style turret came with six inch walls.

I’ve never been a big builder of Soviet themed kits, the T-34 never really did it for me and the war in the East never really held a big appeal. But I do like Field Kitchens, possibly as I’m a big fan of the lower end of technology in World War Two. When MiniArt announced the production of this kit I really liked what it looked like and felt this was probably going to be the kit that dragged me kicking and screaming into building something Russian.

This kit comes in a small tray and lid style box on three large and one small light grey sprue. One of the larger sprues contains the four figures with a few accessories while the others contain the parts for the field kitchen itself. There is of course also the instruction sheet which is a single sheet of paper folded in half to create four pages with a total of twenty six steps done in simple black and white line diagram style.

I’ve said it before and I’ll say it again, I am hardly what you would call a modeller of soviet themed kits. Not unless it’s something in the beute panzer camp. But the figures that come with this set are just irresistable and I am aware that decent quality soviet anti-tank gun kits are pretty limited ( as are most allied ones ). So this kit fills a niche and is rather cool to boot. At least I think so.

This kit comes in a medium sized tray and lid type box on three full sized light grey sprues together with the printed page of instructions which is a single long sheet of good quality gloss paper folded in four to form eight pages. This builds up into the Zis-2 Anti-Tank gun and a crew of five together with a bunch of cooking related accessories. 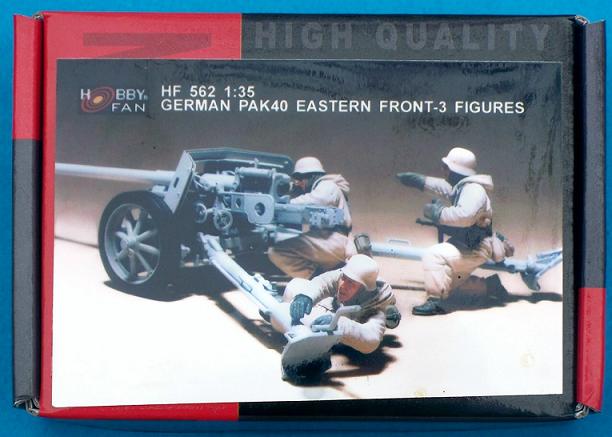