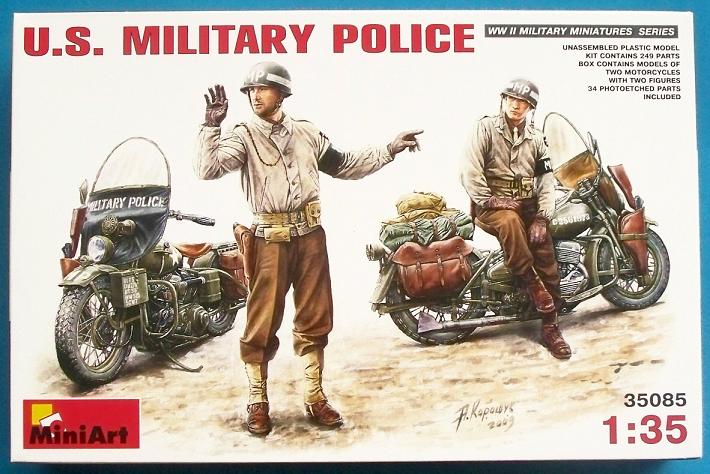 During the month long battle for Poland the German army lost over five and a half thousand motor bikes. That tells you something about the number of motorbikes running around the battlefields of World War Two. Granted in the early days the Germans used huge numbers of them for reconaisance but every army used them and in no small number. So it’s surprising how long it has taken for a few decent kits of motorcycles to trickle onto the market, and even more surprising that till only recently if you’ve wanted a U.S. bike you needed to make do with the old Tamiya example ( which is actually hard to find these days ). MiniArt have finally filled that hole with this kit, not just a good replacement for the old Tamiya kit, but a bloody good one that is streets ahead.

This kit comes in a medium sized tray and lid type box on three light grey sprues. Two of these are the same – one for each bike – and are the size of the box, the other one holds the two figures. There is also two matching clear sprues, two matching sheets of photo-etch, a small sheet of decals and the printed page of instructions which is a single sheet folded in thirds to form six pages.

The moulding quality is pretty much what I’ve come to expect from Miniart of late, which is to say very good with no flash, minimal clean up of mould seams and nice clean, sharp detail. Many of the parts are quite small and delicate but are very well done and I’d happily put the quality up there with the likes of DML and Tamiya.

The intructions likewise are very Tamiya-like, being clear, easy to follow and having a logical progression of simle steps which aren’t overcomplicated. The last page includes a guide for decal placement and painting with a colour chart provided listing the appropriate paint number to use for either Vallejo, Testors, Tamiya, Humbrol, Revell, or Mr.Color.

The bikes are very well done ( by the way these bikes are available individually also, kit number 35080 ) and include quite a bit of photo-etch for such a small kit. I was surprised just how much detail and how many small parts there were with this kit bearing in mind the finished kit is not very big. Many of the finer parts are provided in photo-etch and the windscreen and light lenses are on the clear sprue.

Areas for the fussy to touch up include the end of the exhaust which isn’t hollowed out ( but is incredibly thin so it will take a very steady hand to attempt that ) and each bike includes two saddle bags which are hollow at the back so the pickier modeller may choose to fill these in so they don’t show from the other side. Also, as with pretty much all bike kits, you’ll need to add your own wiring. While I can appreaciate why this isn’t done in plastic I’ve always felt it would be a nice touch if manufacturers provided a reference photo of what goes where and maybe some fine nylon thread to do it with.

The Thompson and it’s scabbard are moulded as two pieces with the top half of the Thompson and the main part of the scabbard as one piece and a separate piece for the outer top of the scabbard so that their is proper internal detail of the gun in what looks like a hollow scabard. Very nicely done. The scabbard attaches to the right hand mudguard mounts which are formed ( as is the left side ) using a small jig that is included in the kit.

The wheels are made from two sets of photo-etched spokes which are formed into a shallow bowl shape using two forms that are supplied as part of the kit. These are then joined together and inserted into the tyres which are each made from three slices to give the best tread definition. The finished effect is very nice and a huge improvement over thicker plastic moulded spokes.

The figures are very nicely done with good poses and sharp detail. The faces are particularly nice and in an unusual move are full heads with no hair and hollow helmets ( no interior lining though before you get your hopes up ). One has his helmet chin strap moulded on, the other doesn’t. One includes a whistle cord shown tucked into his tunic and both get a leather holster for the .45 Colt M1911A1. The holsters have the embosed “US” emblem but as with all 1/35 hoslters of this type you’ll need to add your own leg tie cord. Both get a pouch for spare pistol mags and one also gets the small first aid pouch. Both get the standard U.S. M1 helmet and there is also a duffle with a bedroll, a small bag and a pair of alternate panier bags icluded on the figure sprue for use on one of the bikes.

The decals oddly aren’t as comprehensive as the set included in the single bike kit, possibly as that one is intended for more options where these ones are intended to be displayed as MPs. So you get the Military Police markings for each bike plus decals for the helmets on the figures. There is also decals for the arm bands but just the letters MP so you need to paint the armbands first.

In conclusion. Damn nice. Seriously, this is a very nice set. For the level of detail and what you get this is well worth the money. Motorbikes are such an overlooked item when it comes to making dioramas but they fill a huge niche, particularly when using the principal of scales – Biggest=Building, Bigger=Tank, Small=Bike, Smaller=Figure. If you want to try your hand at something a little different, and use something that can fill the void usually assigned to a Jeep, then get this kit, you’ll be happy you did.