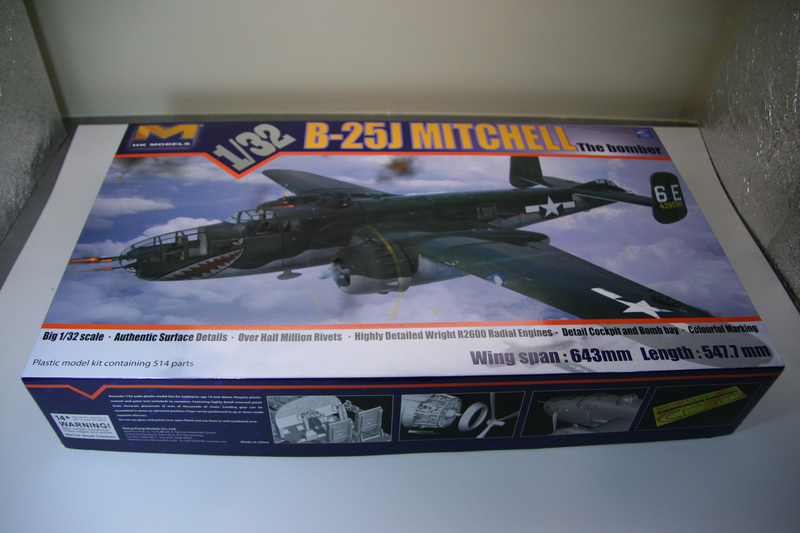 I'd like to thank Neil from HK-Models for this long awaited review kit.
Put all the history and Internet gossip that you may have heard about this kit behind you and join me on this journey.
I rushed home from work as I had been tracking this parcel from Hong Kong, I was surprised at how quickly it managed to get to my doorstep to be honest, nice work EMS and NZ post.
The box was well packed and undamaged by it's long journey, I was surprised at the size of the parcel until I opened it and saw the box inside (the box is 600mm long!!)

The box consists of:

26 x Gray plastic sprues (they vary in size and some have multiples).
2 x Clear Sprues with some very nicely detailed turret glazing etc
1 x small Photo Etch (PE) fret containing the belts and harnesses plus some other bits I've not identified yet.
1 x well laid out instruction manual with a nice approach, definitely geared towards the more competent modeller as it doesn't gloss over stuff.
1 x Very basic decal set, this is the only let down in the kit so far, but on the positive side Neil did say that they were looking to change the decals and provide Cartograph sets for the full production versions.

Without further ado here are the sprues.

I was able to make a start on it the night before last and was pleasantly surprised at how well the parts fit together, they quite literally push fit, which was a help when it came to fixing up.
First section on the table was the Upper gun turret column assembly. 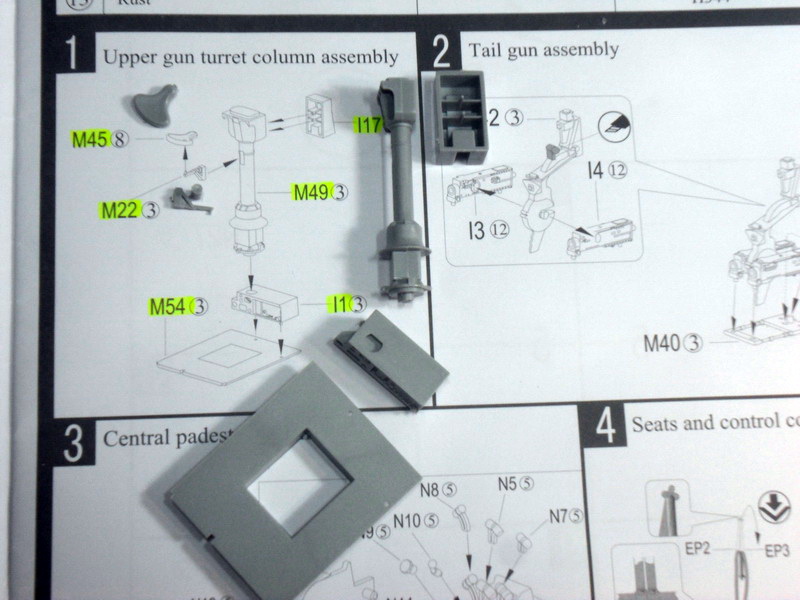 This was a breeze to fit together and got a dusting of Interior Green a few minutes later. This was followed by a black wash and then I picked out the wear areas with a silver pigment pen, this was then toned down with a raw umber wash. The figure is a 1/35 Scale figure and is only there to provide some scale.

Following on from the Upper gun position with the Tail gun section, once again it was evident that the designers of this kit had given the construction a lot of thought. It appears that the location of the glue points and sink holes has been given a lot of thought as they are nicely tucked out of the way and not visible. There has been almost no flash/mould lines and what little there was is easily cleaned up. At first appearance the plastic looks a bit shiny and soft but it soon becomes evident that this is not the case, the plastic is very firm and easy to trim without splintering. 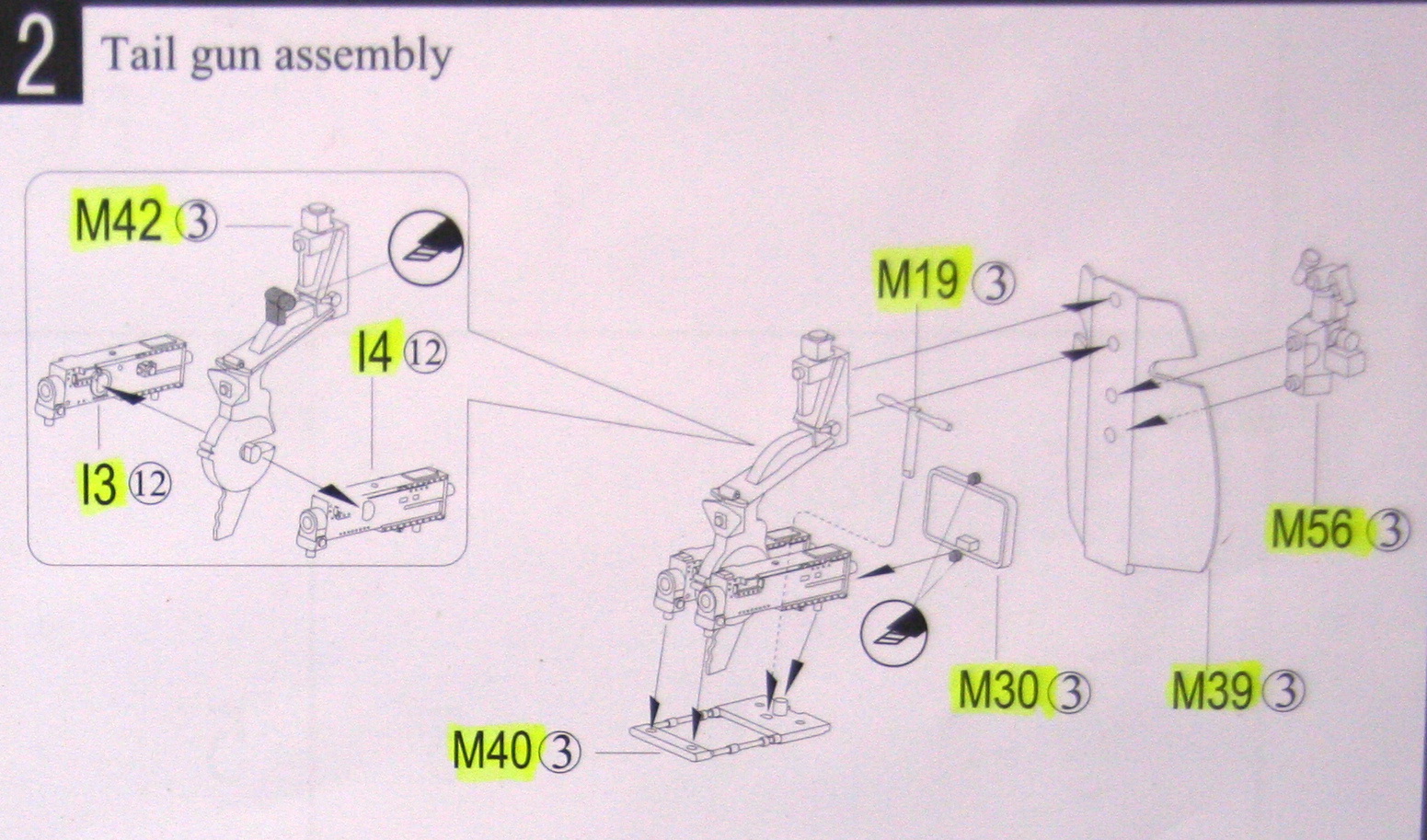 Continuing on from the last section we move on to the cockpit section, it's part one of the cockpit as it really only covers the Pilot and Co-Pilots positions and not the actual "Dash" so to speak.
This is section is no different in terms of ease of build, this kit has been superbly designed, I think it is safe to say that so far it appears to have been designed by a modeller for modellers. All the parts just slip together, to coin an engineering phrase they are friction fits in that they can be put together for dry runs without the aid of tape or blutack etc. When it comes to the actual gluing it is evident that even this has been given a lot of though. Gluing from the other side (no I'm not sitting here with Elvis) is childs play and using liquid glue the joints are invisible. Even the cut off points are hidden, the bits that detach from the sprues are located so as to be hidden when assembled.

The only let down in this part of the cockpit is the seatbelts, I know I've mentioned them already but when someone brings out some decent belts/harnesses this kit will really rock.
I couldn't live myself if I just installed the belts as is, so I cut up some lead foil, ran my riveting wheel up and down to simulate stitching and covered the bare brass belts with the lead foil strips. I had to use a contact adhesive as CA would of just cracked while bending the belts to my will. Positioning of the belts was also a bit of a nightmare, the brass is really quite thick, it's a double thickness PE and as such is very stiff even after attacking the brass with a blow torch.

Here is the finished result of the lead foil over brass, I'm glad I made and fitted the belts prior to painting the chairs, the brass is so thick that it holds it's shape even when it's not in position. 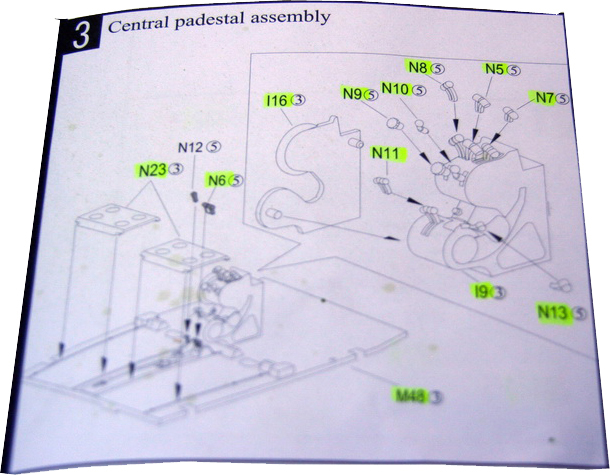 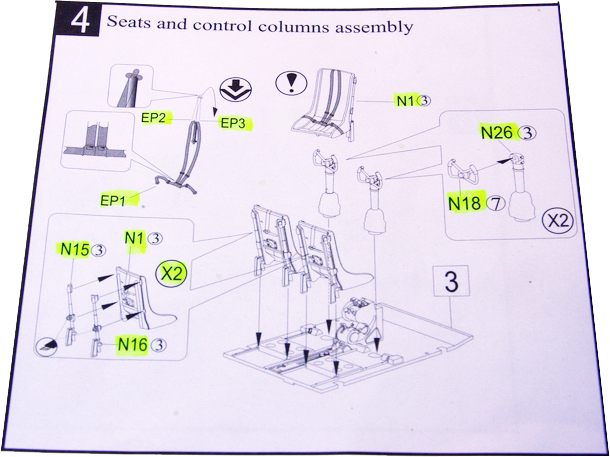 Moving swiftly on to the business end of this medium bomber. Once again I was pleasantly surprised at the how easily everything went together. There is plenty of scope here to add additional features like the links to the bombs for the bomb drop actuators etc but as I'm building it pretty much out of the box I'll leave it for now. There's plenty of detail inside to please almost all purists. 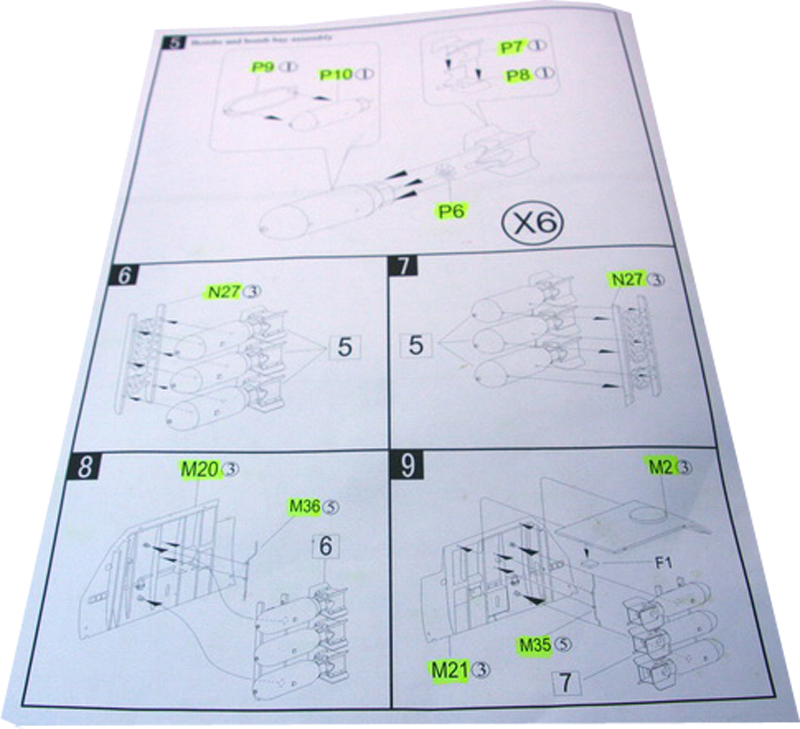 The final part of the cockpit assembly prior to insertion in to the fuselage is appears to be pretty straight forward. This section covers off the addition of the rear bulkhead, the cockpit dashboard and the front wheel assembly. The bulkhead and front oleo assembly were straight forward and relatively simple to fit, the dash assembly itself was very easy but the decals were a pain as the decal material is similar to the home printing type from Testors and are stretchy. I ended up having to cut them in to 5 pieces so as to align the dials with the holes in the dash. It took a while and was pretty fiddly but the end result was very good.

Prior to buttoning up the fuselage halves you are required to add 80 gms of weight to the front section to weigh down the front and stop the plane from being a tail sitter. It would of been nice if this weight had been including in the kit. I know the likes of Eduard add a shaped weight of the required size and shape in their kits and this would of been a nice touch. For my weights I melted down some white metal and poured it in to the lids of some old Humbrol paint tins. These gave me a rough weight of around 18gms each, using 5 minute epoxy these were fixed in to place below the cockpit in the front wheel section. 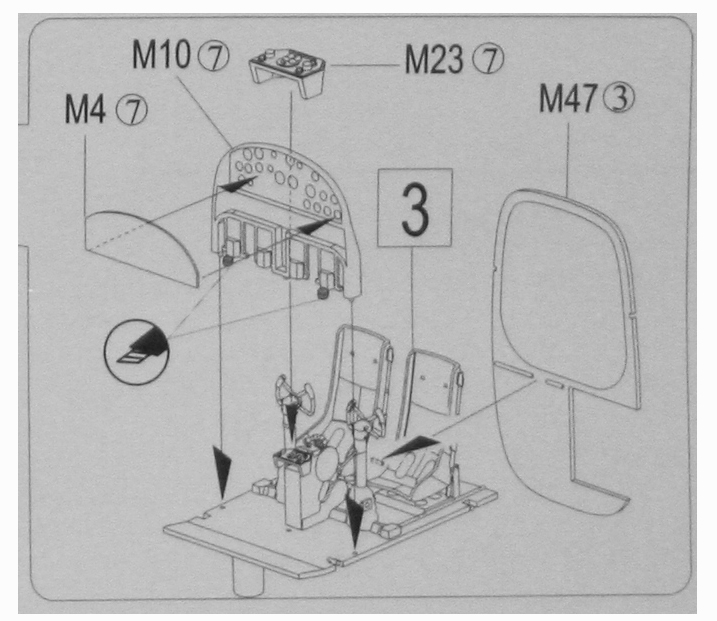 Using the assembly created earlier it was easy to fit it to the base and add the additional components, the ammo feeds were a nice touch and well detailed, the belt holders fit nicely to the 50 cals and the ammo bins fitter to the fueselage. 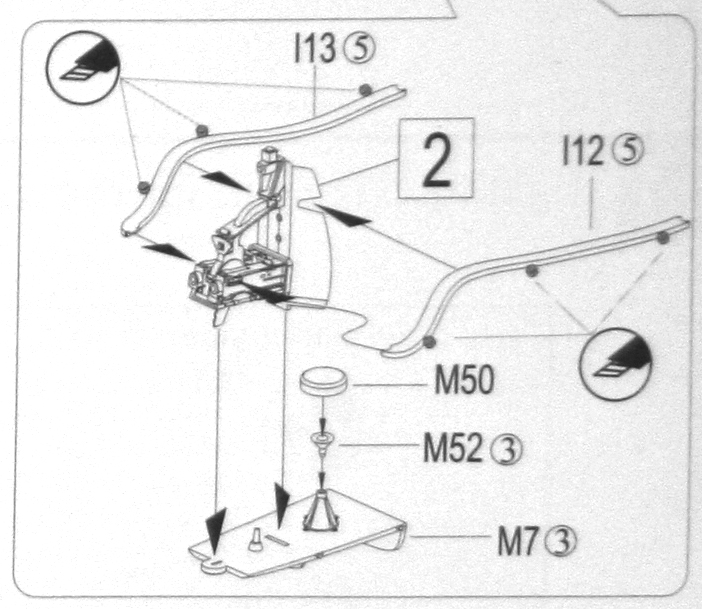 It's worth remembering that you need to insert the completed nosewheel assembly in to the bottom of the cockpit prior to closing up the fuselage as it would be very hard to do it afterwards. It was at this point that I attached the lead weights I mentioned earlier, for this I used a 5 minute epoxy resin.

Waist guns: - Like the barrels on the Tail guns the barrels on the Waist gun positions will benefit from replacement aftermarket barrels. The ones in the kit lack detail on the cooling jackets, while they could be detailed with the aid of a drill I've drilled my fingers too many times in the past and it's easier to just replace them. The guns themselves are well detailed and also include a set of crosshairs. 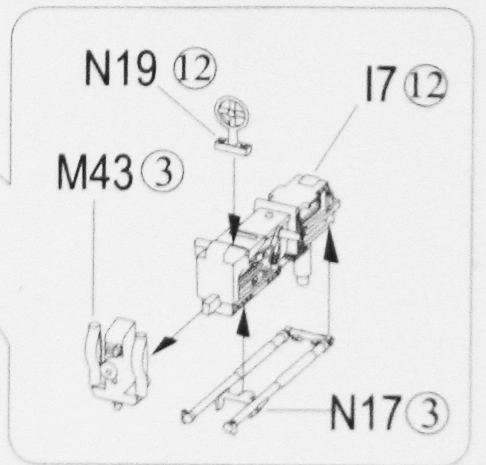 The figure is a 1/35th German Tanker just to show the scale/size of the aircraft.

It's been a bit slow going, I successfully managed to melt the Horizonatal stabilisers with liquid glue to the point where I had to cut out the entire trim flap and replace it with a piece plastic sheet. Not sure if it was the glue or the plastic but I wasn't happy.

Fitting the stabilisers and the rear tail section was a real breeze as per the rest of the kit everything just went together like a dream.

I've started with the glazing and again the all of the clear parts are well sculpted and fit perfectly.