Bandai re releases? The Scout Trooper and Speeder Bike

Or do you perhaps have one you'd like to sell? I found one on Amazon for $65 dollars which is a hundred kiwi, which is too much. Would you believe people are trying to sell them for literally hundreds of dollars? I'd be willing to pay $50 for one in good nick.

I've been out of modelling for ages and had an idea that has really inspired me. I thought it would be cool to have the speeder bike with a figure standing next to it representing just some guy, like a normal scummy Coroscant lowlife. I hadn't had any luck finding a suitable figure in 1:12 until now, with Tamiya's Street Racer figure for their motorbikes, which is almost perfect. He's wearing a motorbike helmet which isn't ideal but it would be easy to paint his clothes to look suitable and maybe scratch build a suitable holster and accessory belt. That will be a challenge for me unless I can find something suitable, such as some image intensifiers, in the right scale.What do you think?

Thank you very much.

Less More
9 months 1 week ago #2 by CyNaKyL
Replied by CyNaKyL on topic Bandai re releases? The Scout Trooper and Speeder Bike
Hit Reon up on his website here , plus you get a Kiwimodeller discount and you are supporting one of the boys.
In Soviet Russia, Iron Curtain GB builds you!

Less More
9 months 1 week ago #3 by Admoto
Replied by Admoto on topic Bandai re releases? The Scout Trooper and Speeder Bike
I have Tamiya 1/12 Motorsports team figures. These need assembled and painted. A bit of work cleaning up the seams. May not still have the guy in the centre kneeling but have the other 3. You can have any of them no charge. Postage cost only. OR you can use 6 inch action figures as they are around 1/12 scale. . Or American Diorama do a selection of 6 inch resin figures. You can find them on ebay . - ( postage out of the USA is often bloody expensive ) 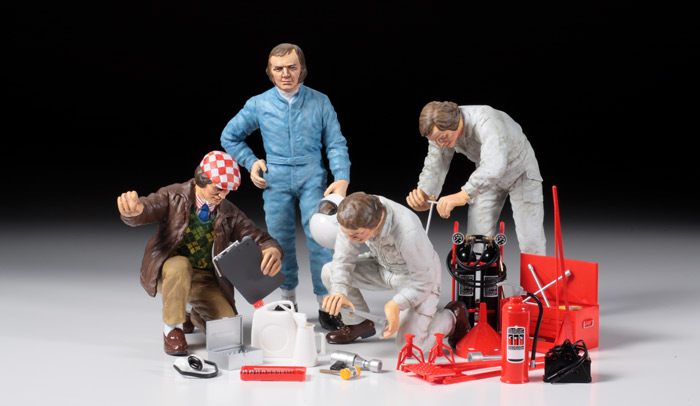